Amazon has disclosed how many government data demands it receives -- finally. 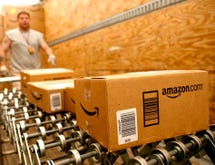 The biggest mystery is why the retail and mobile giant has kept quiet for so long.

"Where we need to act publicly to protect customers, we do," said Schmidt. "Amazon never participated in the NSA's PRISM program," he added, despite no evidence to date showing that the company had been forced to hand over data through the clandestine surveillance program.

Despite it being known best for its online retail business, its cloud services power millions of apps, sites, and services around the world. But the news couldn't come soon enough. Amazon is the last major technology company in the Fortune 500 to disclose how many times governments have come knocking on its door, demanding customer and user data.

Amazon, known by insiders for being notoriously secretive, was at no point under a legal obligation to report its numbers, but had faced mounting pressure in the face of transparency reports becoming an industry norm.

Schmidt said the report, which covers the six months starting January 1 and ending May 31, will be released biannually.

Amazon disclosed that it had received between zero and 249 national security requests, such as a court order issued by the secretive Foreign Intelligence Surveillance Court.

The company could not specifically say whether or not it had received a single classified order.

In the wake of the NSA surveillance scandal, tech companies demanded the right to disclose how many secret data demands they received from the government. The Justice Department eventually relented, allowing those figures to be reported in wide numerical ranges.

The company's second bi-annual report is expected later this year, or early next.

Join Discussion for: After years of silence, Amazon releases first...