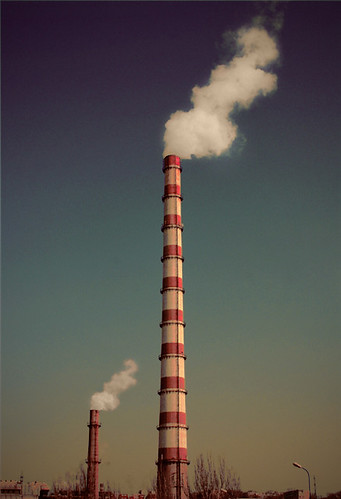 The hidden costs of coal , tallied by a study last week, may fall around $345 billion every year. Factoring significantly into that price is public health.

This week, a new study specifically examines air pollution's influence on the incidence of heart attacks. Published in The Lancet, the research found that air pollution increases the relative risk of a heart attack by 5 percent.

Many things, of course, contribute to your personal risk for a heart attack. Family genetics aside, an individual's everyday choices involve many of them. People can decide whether to eat another doughnut, skip the gym for another hour on the couch, have another smoke, or snort another line of cocaine.

But breathing isn't a choice. And while air pollution can be worse in poorer neighborhoods located near industrial plants and highways, dirty air can still affect health across a population.

Combining data from 36 studies, the Belgian researchers calculated the risk of 13 known heart attack triggers—from sex to coffee to respiratory illness—for people as well as for populations as a whole.

In a statement, the researchers said:

Of the triggers for heart attack studied, cocaine is the most likely to trigger an event in an individual, but traffic has the greatest population effect as more people are exposed to the trigger…PAFs [Population-Attributable Fractions] give a measure of how much disease would be avoided if the risk was no longer present.

The study analyzed traffic separately from heavy particulate air pollution. In addition to blasting car exhaust in our faces, being stuck in traffic is emotionally stressful (for some more than others. I'm looking at you, dad!). Traffic itself came with a relative risk of more than 7 percent.

About the study, Andrea Baccarelli of the Harvard School of Public Health and Emelia Benjamin of Boston University's School of Medicine wrote:

Despite limitations, Nawrot and colleagues have provided us with an exemplary piece of epidemiological work that furthers our understanding of myocardial infarction triggers. Their work stands as a warning against overlooking the public health relevance of risk factors with moderate or weak strength that have high frequency in the community.