Altaba to sell remaining Alibaba shares and shut down

The remaining Alibaba shares are expected to generate around $40 billion for Altaba stockholders.
Written by Campbell Kwan, Journalist on April 3, 2019 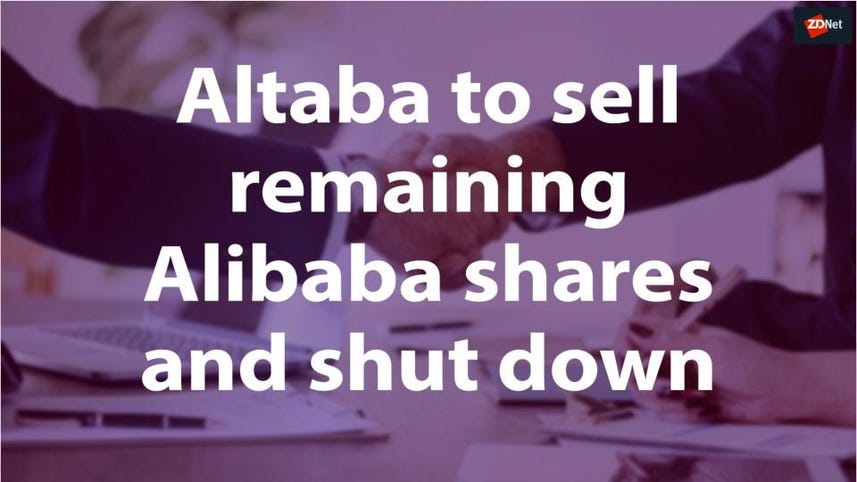 Altaba, created from Yahoo's remains post Verizon's acquisition of the company, has announced it will liquidate and dissolve itself.

As part of the company's dissolution, Altaba will sell its remaining Alibaba shares and its Excalibur portfolio. The sale of its Alibaba shares is expected to generate around $40 billion for Altaba stockholders, with the company providing a ranged estimate of $39.8 billion to $41.1 billion. The amount distributed to stockholders may vary however, depending on how the company handles its liabilities when closing shop.

Prior to this, the company had sold 24% of its Alibaba shares in July before buying them back in August in an attempt to reduce the gap between its share price and net asset value.

"Since June of 2017 we have taken a series of aggressive actions designed to drive shareholder value and these have yielded measureable results as our trading discount has narrowed and our stock has meaningfully outperformed a composite of its underlying assets. The right next action for shareholders is the plan we are announcing today as it represents the most definitive step, generally within our control, that we could take to reduce the discount to net asset value at which our shares trade," Altaba CEO Thomas McInerney said.

The investment company was founded in 2017, and initially owned stakes in Alibaba and Yahoo Japan, as well as Yahoo's non-core patents called the Excalibur portfolio, that were holdovers from Yahoo prior to its acquisition by Verizon.

"The acquisition of Yahoo will put Verizon in a highly competitive position as a top global mobile media company, and help accelerate our revenue stream in digital advertising," then-Verizon chairman and CEO Lowell McAdam said at the time.

Yahoo names CEO for Altaba spin off, and it's not Marissa Mayer

Mayer won't lead the newly formed Altaba Inc, made up of Alibaba and Yahoo Japan. If Verizon doesn't hire Mayer following the sale, she could get a cool $23 million.

Verizon's acquisition of Yahoo is complete

The final price tag for the deal is almost $4.5 billion. Yahoo CEO Marissa Mayer has resigned.

With Verizon's $4.8 billion purchase of Yahoo's operating business closing this month, CEO Marissa Mayer will leave the Yahoo board, and the remainder of the company will be renamed Altaba.

How to create Photoshop actions to share or sell

How to create Photoshop actions to share or sell

Photo & Video
How to clean and sanitize your AirPods