I like Amazon hardware. A lot. Over the years I've had countless Kindles and Fire tablets, Echo and Echo Dot smart speakers, Echo Buds, and I've even got a Kindle Oasis e-reader for times when I don't want to be in front of an LCD or OLED display.

Today sees Amazon release its new Fire HD 8 tablet, and `I've been playing with one for the past few hours, and apart from a few key improvements, it feels like every other Fire HD tablet I've owned.

And I'm OK with that.

The design is simple. An 8-inch touchscreen display embedded into a plastic tablet. There are a pair of Dolby speakers, a front and rear camera, a few buttons, a USB port for charging, and a headphone jack for people who still haven't moved to wireless.

It's a robust, tried-and-tested design that, to borrow an Apple phrase, just works.

Must read: The new Amazon Fire HD 8 is the iPad for people who want to spend under $100

But the improvements are very welcomed.

The first thing I noticed about the Fire HD 8 is that it's fast.

Not iPad fast, but a lot faster than its predecessor.

Amazon says that it's 30% faster, and I have no problem believing that. While I would not have called the old Fire HD 8 slow, it could be sluggish at times, and this updated model feels a lot smoother. I'm also sure that the RAM bump from 1.5GB to 2GB helps, especially when juggling large media files or apps.

The hardware is really pulling its weight.

As someone who has a lot of Audible audiobooks, I appreciate the doubling of the storage, and it means that I no longer need to keep a microSD card in the tablet… for now at any rate!

Then there's the 20% longer battery life, which according to Amazon pushes total battery life up to 12 hours.

I never say no to extra battery life.

The most remarkable thing about the Fire HD 8 is the price. A Fire HD 8 with 32GB of storage will set you back only $89.99. And yet this tablet doesn't feel like a $90 tablet.

This is a very capable tablet. True, the deeper you are into the Amazon ecosystem the more you get out of it, but even as a standalone tablet, because of the great selection of apps -- especially entertainment such as Netflix and TV stations and communications such as Zoom -- it's the perfect tablet for people who don't want to spend iPad prices. 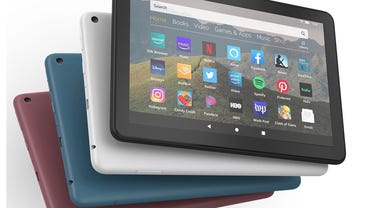 Join Discussion for: Amazon Fire HD 8 hands-on: Perfect for those...