Amazon has taken its Fire HD 8 tablet and made it even better with a 10th-generation 2020 release.

While it can't come close to holding a fire to the iPad, it's the perfect tablet for those who want to spend less than $100.

Out is the old 1.3GHz quad-core processor, replaced by a new 2.0GHz quad-core chip that Amazon claims boosts performance by 30 percent. Storage also gets a bump, with the new Fire HD 8 being offered with 32GB or 64GB, a doubling of the capacity compared to the previous model.

And if this isn't enough, Amazon has added a microSD card slot compatible with 1TB cards, giving the tablet expansion possibilities, which means there's no penalty if you buy the 32GB model.

This gives the Fire HD 8 a huge advantage over the iPad, where Apple doesn't offer microSD card expansion. Pricing is where Amazon's Fire HD 8 really has Apple's iPad beat. Apple's cheapest iPad in a similar size -- the iPad mini 5 -- starts at $399.

However, if you don't mind a larger screen size, the iPad now starts at $329. Cheap, but nowhere near as cheap as the Fire HD 8.

Amazon Fire HD 8 and 8 Plus 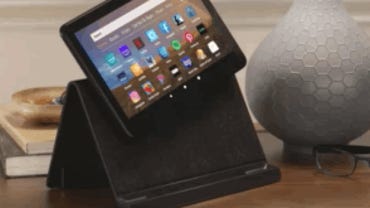 The new Fire HD 8 and Fire HD 8 Plus tablets will be released on June 3 and are currently available for pre-order. Amazon also has an offer where if you buy two tablets, you get $20 off.

RAM gets a bump in Amazon's new Fire HD 8, from 1.5GB to 2GB, and a whopping 3GB in the Fire HD 8 Plus. The Fire HD 8 Plus also adds wireless charging to the tablet, a much-requested feature.

Charging is now handled by a USB-C port, doing away with the older, more fragile microUSB port. This port allows the Fire HD 8's battery -- which is rated as all-day and offers 12-hours of use -- to be charged in under 5 hours. This is a 20 percent improvement on the previous model.