Amazon updates its Fire HD 10 tablet, but make no mistake: The move is all about putting Alexa everywhere.
Written by Larry Dignan, Contributing Editor on Sept. 19, 2017 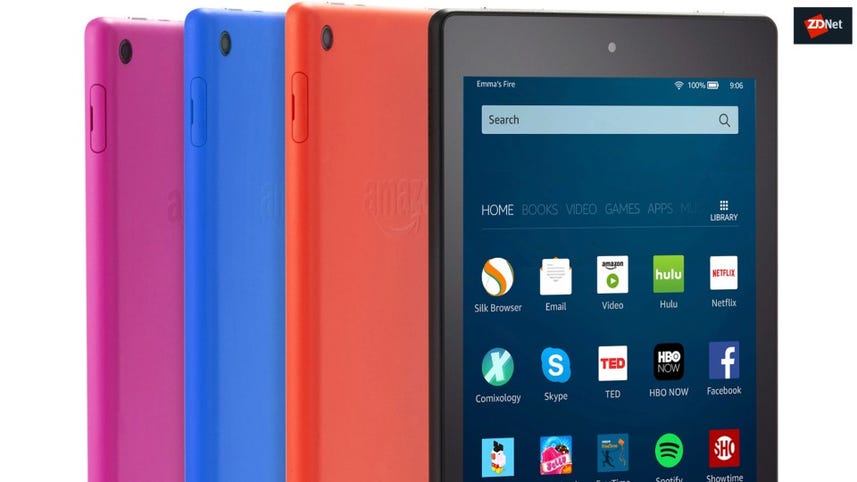 Amazon launched a new Fire HD 10 tablet that will run you $149.99 and come with an Alexa hands-free mode. Amazon's strategy of using devices to move content sales and commerce has combined with seeding Amazon everywhere.

The hands-free mode, the first time Amazon has added it to a Fire tablet, allows you to ask Alexa to play or pause a video, set timers, play music and give smart home commands.

Not surprisingly, the Amazon Fire HD 10 comes with spec improvements such as:

But don't take your eye off the Amazon ambition ball. This Fire HD 10 update is really about boosting Alexa's footprint in the home. The Fire HD 10 could also serve as a smart home dashboard.

You can also use Alexa hands-free on the new Fire HD 10 to control a range of smart home devices from SmartThings, Insteon, ecobee, Wink, and more. Dim the lights or adjust the thermostat using just your voice. Also, for the first time on a Fire tablet, you can ask Alexa to show you what's on your smart home security camera with compatible devices from Nest, Ring, and Arlo.

Amazon is aggressively compensating for the lack of Alexa on smartphones by effectively giving the devices away and pushing e-commerce as hard as it can. A land grab strategy makes complete sense because the more Amazon can drive Alexa usage, the more data it will generate and the better it can become. Usage is the key to making all digital assistants better and this is the one area where Amazon has huge ground to make up compared to Google.

Windsor added that Amazon's plan is to put Alexa everywhere--especially in the home. He said:

The fact that Google is still really struggling in the smart home, is why Amazon still has the upper hand which it is showing no sign of losing. This move is clearly aimed at seeding as much of the market as possible before Google can get its act together. If a large number of households have Alexa which is working nicely with the other smart devices they have at home, it will be increasingly difficult for Google to win them back even with a superior product.