Amazon is focused on customers rather than competitors and that's bad news for every other company, which has to worry about real or imagined competition from the e-commerce and cloud juggernaut.
Written by Larry Dignan, Contributing Editor on Aug. 27, 2017 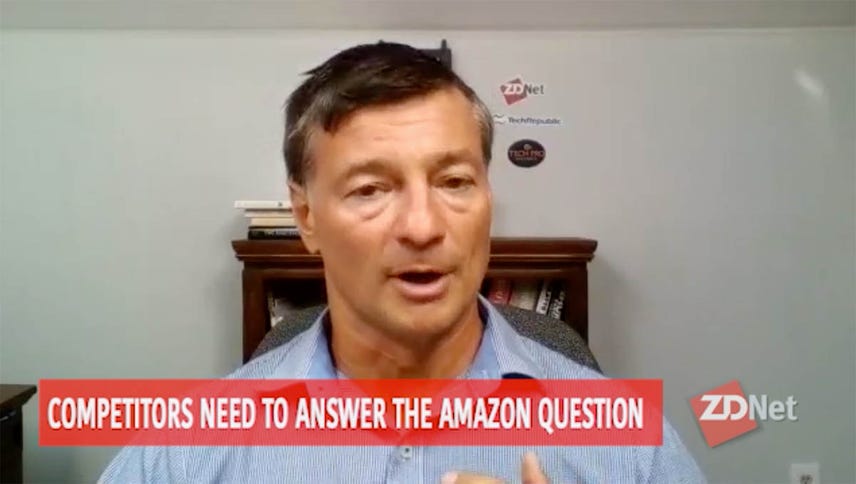 Amazon is good at driving its own business strategy, and apparently, the master plans of every competitor -- real or imagined -- too.

You can't have an earnings conference call or public forum without ultimately addressing a question about Amazon. Why? Check out Amazon's "about" statement:

Amazon is guided by four principles: customer obsession rather than competitor focus, passion for invention, commitment to operational excellence, and long-term thinking.

That mission statement is concise and a big pain in the keister for rivals. Amazon's lack of competitor focus (as if anyone buys that line) means competitors need to focus on the e-commerce and cloud juggernaut.

Consider the following battlegrounds plucked from the headlines this month.

Google and Walmart have teamed up on shopping, with a Google Assistant integration for Google Home. Under a deal last week, consumers with Google Home can buy Walmart products through the speaker. Walmart joins Cosco and Target with similar deals. Fear of Amazon impact: Amazon is clearly using Alexa to drive e-commerce over time. Google needs to counter Alexa's momentum, and Walmart needs to have a partner for voice-activated shopping. Double bonus is that Google Cloud Platform may land Walmart as a customer since hell would freeze over before the retail giant uses AWS.

Why? Former Home Depot CEO Frank Blake was quoted in the Atlanta Business Journal calling Amazon a "dark star" and noted that Alexa will ultimately favor the e-commerce giant's products. Blake said: "Every retailer is going to have to figure out its strategy for dealing with Alexa."

Apple is reportedly going to invest $1 billion in procuring original content and creating its own shows. Now you can argue that Apple is looking to compete better with Netflix, and ultimately, Facebook and Google's YouTube. But Amazon is a platform play, and Prime puts a video service in consumers' hands. Apple needs its own content to play ball and counter Netflix and Amazon video. Incidentally, Netflix runs on AWS too.

Ever since Amazon announced plans to buy Whole Foods, the storyline that the e-commerce giant was going to take down brick-and-mortar has gone crazy. As I noted before, the Amazon conquering everything storyline is a bit much.

But the Amazon-Whole Foods deal is now closed and the integration points are going to be worrisome for multiple retailers. Consider:

How nutty has the Amazon disruption meme become? Home Depot reported a stellar second quarter and spent most of its conference call allaying worries about Amazon's deal with Sears to sell Kenmore appliances and price competition in multiple categories as well as search keywords.

In many, many categories, the shopping experience starts in the digital world, even though it might finish in the physical world or in some cases, actually finish in the digital world as well. It is truly a blended experience today where the customer, the front door of our store is no longer at the front door of our physical store for many, many product categories. The customer starts digitally, looking at products, doing research. And then, in many cases, particularly in large ticket, they come in and they actually want to talk to one of our associates before they make a purchase. But we clearly, in big-ticket categories, we sell both in the physical and the digital world.

Rest assured that the Amazon Web Services powwow, known as Re:Invent, will include a heavy dose of artificial intelligence. Google has laid its claim on AI in its cloud. And Microsoft is moving to position the company as an AI cloud.

AWS and Google already have their processors for AI tasks.

These AI announcements are going to ramp as AWS preps its annual customer conference. Ultimately, enterprises will have multiple AI technologies, but the cloud wars will revolve around deep learning and neural networks for the foreseeable future. Maybe Amazon disrupts the AI market too, but the battle field is huge.

And this AI cloud battle will take place industry by industry. Microsoft announced a strategic alliance for cloud and digital transformation with Halliburton. Halliburton will leverage Microsoft's machine learning, Internet of things and augmented reality technologies.

Read also: What is cloud computing? Everything you need to know from public and private cloud to software as a service | How to Implement AI and Machine Learning |

Now, you know what comes next: Every company that touches education will have to defend itself against Amazon and its digital strategy for education. Give it time and we'll be talking about how Amazon will replace teachers, tutors, and schools, too. Maybe Amazon will even use some of those empty mall spaces.