Full Bio
Posted in Between the Lines on September 28, 2011 | Topic: Amazon

Amazon's launch of its Kindle Fire tablet is more than just a threat to Android tablets, Apple's iPad and Barnes & Noble's Nook. The Kindle Fire is ultimately a showcase for all of Amazon's services---including its cloud clusters---and a channel that integrates everything in one bundle.

To think of the Kindle Fire in mere competitive terms and label it with an iPad-, PlayBook- or Android-tablet- killer headline misses the point. Amazon is throwing its kitchen sink into a 7-inch tablet and using it as an end-point for its content and services. At the Kindle Fire press conference Wednesday, Amazon CEO Jeff Bezos said:

Amazon Web Services, Amazon Prime, Amazon Kindle, Amazon Instant Video, our MP3 store, Appstore for Android – we asked ourselves, is there some way we can bring all of these things together into a remarkable product offering that customers would love? The answer is yes. It’s called Kindle Fire.

The Fire finally gives Amazon a device to fully leverage the myriad types of content it already sells, including movies, TV shows, music, documents and applications. Bezos played up the device’s ability to display magazines (for which it had an extensive library already in place, aptly called “Newsstand”) and its use of Whispersync to download movies, TV shows and other kinds of content the e-Ink Kindle can’t handle.

Among all of Amazon's services, Silk/AWS may be the most notable. Amazon has found a way to use a Web browser to popularize its Web services---currently an enterprise play---to the consumer masses.

In its blog post introducing Silk, Amazon outlined a hybrid browser that will offload some computing tasks to the cloud. Amazon said:

All of the browser subsystems are present on your Kindle Fire as well as on the AWS cloud computing platform. Each time you load a web page, Silk makes a dynamic decision about which of these subsystems will run locally and which will execute remotely. In short, Amazon Silk extends the boundaries of the browser, coupling the capabilities and interactivity of your local device with the massive computing power, memory, and network connectivity of our cloud. 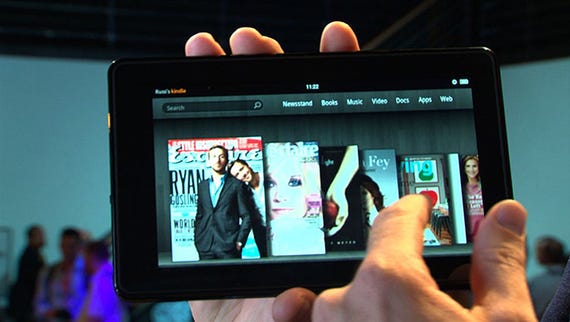 While the split browser architecture is not new, Opera having been a player for a couple of years, I find the overall strategy to be an interesting spin on the me-too Android software we have seen so far, and possibly a game changer. In one fell swoop Amazon harnesses its commanding lead in cloud services, the content richness of a leading online retailer and its successful Kindle business strategy to deliver what might become one of most effective antidotes to the mobile bandwidth crunch.

The key element is that Amazon is going to use its Kindle beachhead to push its services, content and e-commerce. The Kindle Fire represents Amazon's most direct channel to the consumer.

With Kindle Fire, Amazon looks to burn down Apple's house (first impressions) | CNET: To beat Apple, Amazon's trying to be Apple | The Amazon Kindle Fire is no iPad Killer