Embedded versions of AMD's EPYC and Ryzen processors have landed, taking the Zen architecture to new places, filling out the company's processor portfolio, and putting even more pressure on Intel. 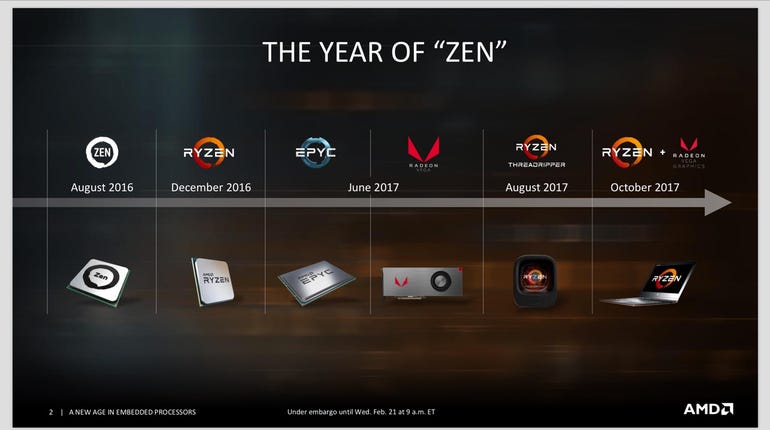 And the momentum continues into 2018.

While AMD has the desktop, laptop, and the server market well covered with this broad range of silicon, there are gaps. And it's these gaps that the Sunnyvale chipmaker is filling in with embedded versions of its EPYC and Ryzen processors. These parts expand these chips into diverse areas such as casino and arcade gaming, thin client, 5G cellular, medical imaging, IoT gateways, and router. 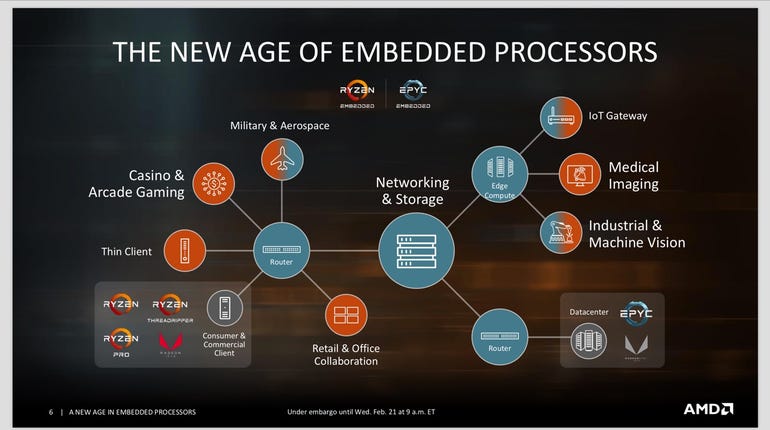 Let's start with the new embedded EPYC parts: The EPYC 3000-series parts. And the highlights are impressive:

All this in integrated into a SoC package, which means no chipset, and has built-in Secure Memory Encryption (according to AMD, this only adds some 1- to 2-percent overhead), Secure Encrypted Virtualization, and Hardware Root-of-Trust.

This series ranges from low-power 4-core/4-thread parts with a TDP of 35 Watts, to monster 16-core/32-thread 100 Watt TDP aimed at some serious heavy data lifting.

The complete line up of EPYC 3000-series processors is very strong, hitting all the wave crests of price and performance points:

Read also: The iPhone X/8's best feature is one that most people will never get to use 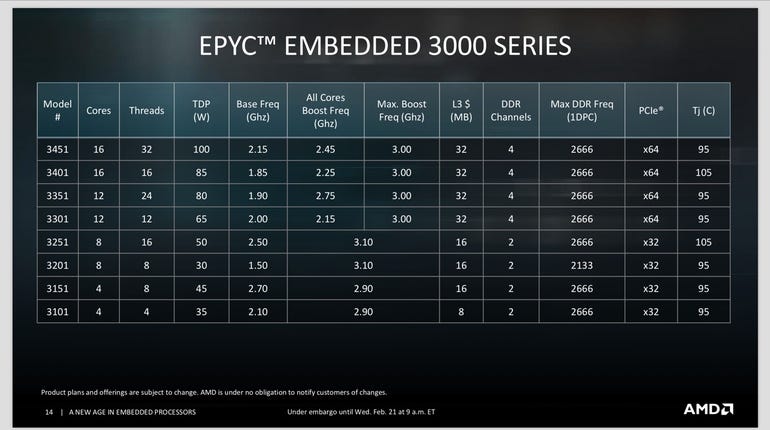 When the EPYC Embedded 3451 and 3251 are pitted against Intel's Xeon D-1587, and D-1540 (both older Broadwell parts, with Intel having rejigged its line up over the past few weeks), the AMD parts offers up to 50 percent more performance and up to 2.7 times the performance per dollar. 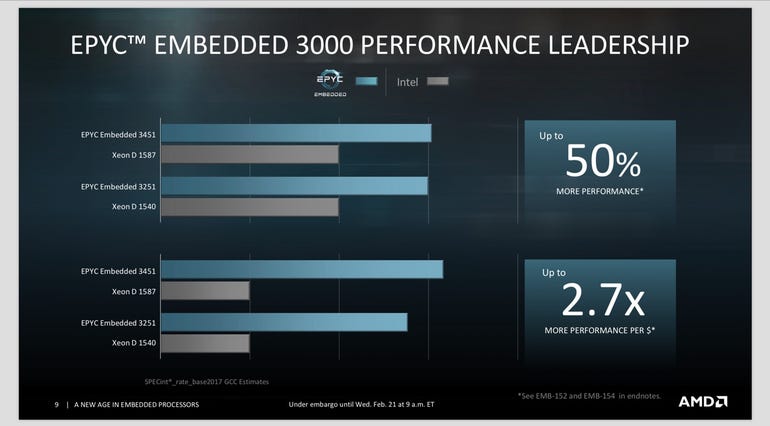 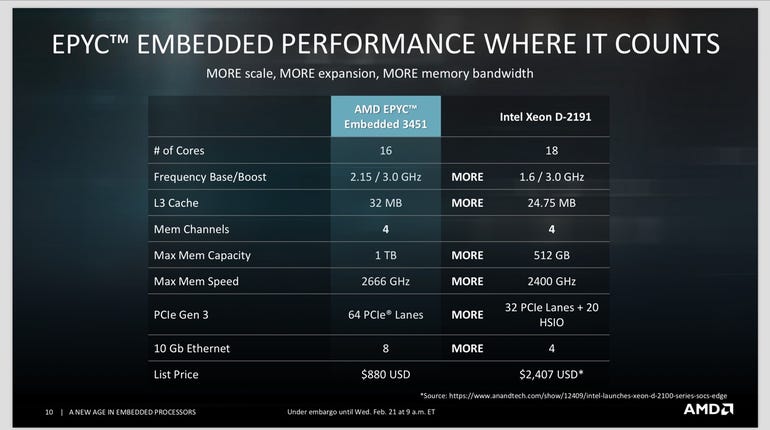 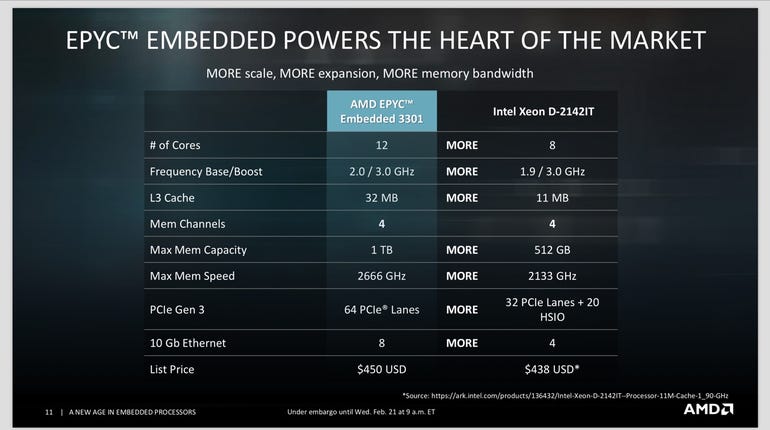 Next up, the embedded Ryzen silicon: The Ryzen V1000-series APU. 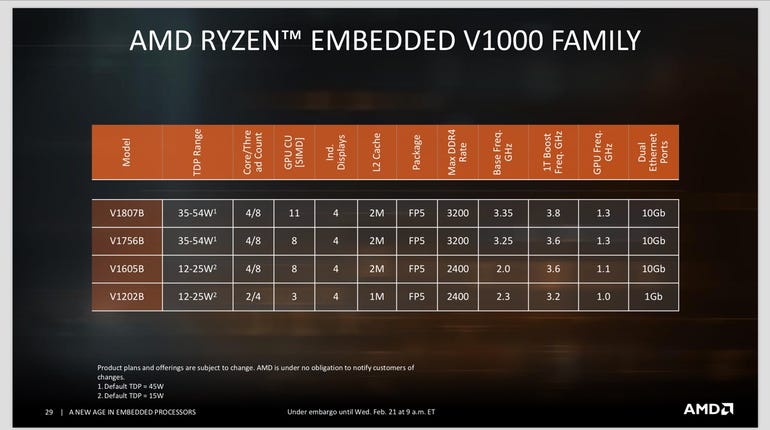 In benchmark tests (Cinebench nT and 3DMark 11 P) compared to equivalent Intel hardware, the V1000-series parts offer up to 46 percent better multi-threaded performance (although at the upper end the difference between the V1807B is pretty similar to Intel's i7-7700HQ) and up to three-times better GPU performance. 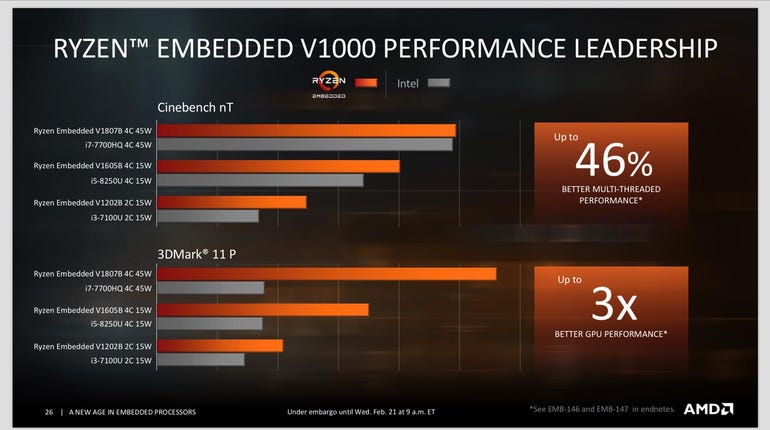 Read also: How many iPhones did Apple sell every second?

The other day I had the chance to speak to Andrej Dvorak, CTO of Esaote, a maker of diagnostic ultrasound systems, and one of AMD's partners that has adopted embedded Ryzen chips to find out what attracted the company to the new silicon. Along with having a deep and infectious knowledge of medical devices, Dvorak had no problems rattling off a long and diverse list of reasons why Esaote turned to AMD for Ryzen Embedded V1000 APUs to power its new MyLab 9 platform:

"As one of the top global providers of diagnostic ultrasound systems, it is imperative that Esaote partners with technology leaders that support the sophisticated signal and image processing needs as well as graphics display capabilities that doctors and technicians rely on to make critical diagnostic decisions," said Dvorak. "Not only does the new AMD Ryzen Embedded V1000 enable us to deliver world-class performance and crystal clear diagnostic images, the degree of integration allows us to develop more compact ultrasound systems that pack the performance punch of much larger machines, improving TCO for our customers and a better experience for patients, doctors and medical staff."

There are no shortage of other customers and partners leveraging embedded Ryzen parts, ranging from Seagate and ASRock to Asus and Sintrones. 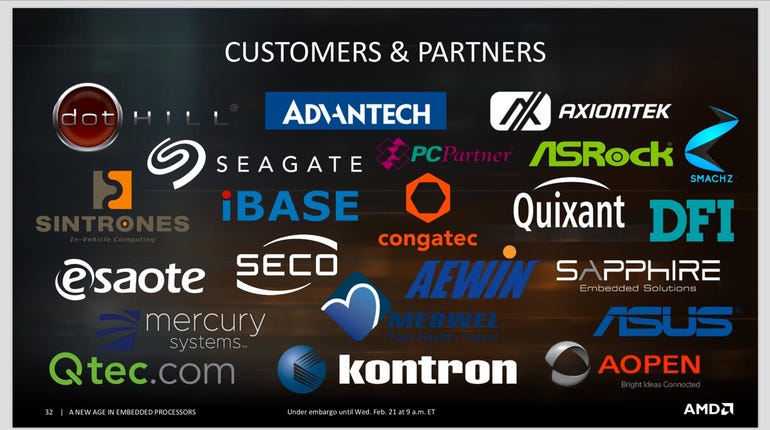