The chipmaker reported a loss of $180 million, or a loss of 23 cents per share. Revenue landed at $1.03 billion, down 26 percent on the year-ago quarter (statement). 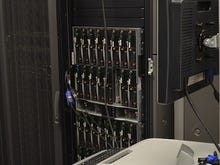 An inside tour of AMD's Atlanta super-datacenter (pictures) Imagine squeezing 18 buildings worth of servers, data racks, and networking gear into just two. That's exactly what AMD is doing. ZDNet was one of the first to tour the company's soon-to-be only U.S. datacenter.

Non-GAAP earnings were a loss of 9 cents per share.

Wall Street was expecting a loss of 5 cents per share on revenue on $1.05 billion.

AMD chief executive Lisa Su was surprisingly upbeat despite the lower-than-expected results, looking at the future rather than dwelling too much on the past.

She added: "Under the backdrop of a challenging PC environment, we are focused on improving our near-term financial results and delivering a stronger second half of the year based on completing our work to rebalance channel inventories and shipping strong new products."

The chipmaker had $906 million in cash and equivalents, down from $134 million during the three-month period.

AMD's performance by department varied, but both fared badly:


AMD closed up 6.3 percent at market close. In after-hours trading, its shares dropped by more than 9 percent.