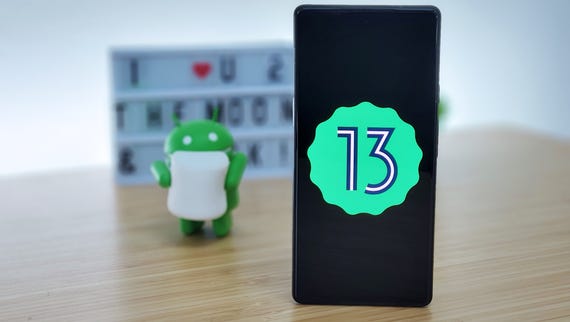 Android 13: How to install the public beta on your phone
Watch Now

One of the many perks of owning one of Google's Pixel phones is early access to future Android updates, and that includes the recent launch of Android 13 Beta 1. Previously, Android 13 was only available to developers, but the program was expanded to include anyone who's willing to deal with occasional bugs and issues.

Android 13 includes several new features and improvements, including new privacy features and changes to the interface. The official release of Android 13 in its finalized form is currently expected sometime after July.

Installing the first Android 13 beta takes a few minutes of your time, but it can potentially have some big consequences. As the name clearly states, the update is a beta, and that means there are going to be issues and bugs that can be difficult to live with at times. I've personally encountered bugs during previous Android beta programs that prevented me from sending or receiving text messages, placing a call, or launching banking apps.

Right now, Android 13 is only available for Google's Pixel phones, but Google usually works with its hardware partners to add more devices before the official launch.

It is possible to leave the beta and go back to the current stable build of Android 12, but in order to do so, you'll have to factory reset your Android phone and start fresh, and Google is currently saying that you may experience issues restoring from an older device backup when moving between Android 13 and Android 12.

If that doesn't sound like fun to you, then I recommend waiting until later in the beta program before signing up. With my routine warning out of the way, here's how you can opt-in to the Android beta program to get Android 13 right now.

Google is currently limiting the phones that can install Android 13 to its Pixel lineup. The approach isn't new; Google has traditionally limited the developer preview to Pixel phones before opening the public beta around Google I/O (which is next week) and working with its hardware partners to make beta builds available for the likes of OnePlus and Oppo.

To install Android 13 today, you'll need one of the following phones:

How to install Android 13 Beta 1

The process for installing Android 13 Beta 1 follows the same steps as previous beta programs ran by Google. That is, as long as you have a Pixel phone, you'll simply need to visit the Android Beta website, sign in using the same Google account that you're using on your Pixel phone, and then click a few buttons. That oversimplifies it a bit, so let's take a closer look.

Either on your phone or a computer, visit google.com/android/beta. Sign in with the Google account that's used on your Pixel phone. Before you click the opt-in button in the next step, take a few minutes to read through everything Google has listed here. You'll learn more about the ins and outs of the program, as well as read Google's own warning for what to expect when testing a beta.

When you're ready, scroll down to the section labeled Your eligible devices. Find your Pixel phone, then click the blue Opt In button. A popup will ask if you want to enroll in the Android 12 program, or jump ahead to Android 13. Check the box next to Android 13, then click Review terms. Read through the terms, then check, at a minimum, the box that says you agree to the terms. If you're interested in receiving more information, check either one or both of the other checkboxes. Finally, click Confirm and enroll.

Wait a couple of minutes, then unlock your Pixel phone and check for a software update (Settings > System > System Update) and you should see that Android 13 is ready to install. Let it install as you would any other software update.

If you decide to install Android 13, leave us a comment and let us know why as well as share any new features you've found.

Join Discussion for: Android 13: How to sign up and install Beta...