The Korean firm kicked off its global rollout of Android 7.0 Nougat to its flagship G5 smartphones, starting with owners on its home turf.

Korean G5 owners will see a Nougat upgrade notification today, while owners in the Americas, Asia, and other markets will have to wait a "few weeks" following completion of the usual carrier testing phase. 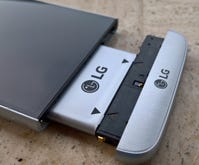 Android 7.0 has for the first time showed up on Google's Android distribution chart following its release in October.

Google doesn't show versions of Android with less than 0.1 percent share but as of this week Nougat has appeared with a 0.3 percent share of all Android versions hitting Google Play during the seven days ending on November 7.

Android 6.0 Marshmallow, which is still shipping on newly launched handsets, is up 5.3 percentage points from October to 24 percent, while Lollipop now accounts for 34.1 percent, and KitKat accounts for 25.2 percent.

Nougat's share should rise further in coming months once Samsung completes beta testing Nougat with Galaxy S7 and Galaxy S7 Edge owners. Samsung is selecting participants in the US, UK, South Korea, and China for the program, which according to Sammobile, starts on November 9.