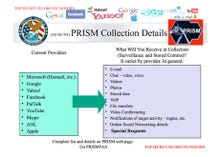 UPDATED: Turns out U.S. government agencies might be tapping into into a lot more than just Verizon customer records.

Following the news on Thursday that both the FBI and the National Security Agency have been secretly mining data from nine Silicon Valley giants for years, there has been an incredibly heated debate both for and against the classified program dubbed "PRISM."

To add more fuel to the fire, there are now even more classified documents being leaked to the masses, courtesy of the global hacktivist community, Anonymous.

As of Friday morning, the group has published 13 documents and presentations from various U.S. government agencies. Topics of said documents range from NetOps strategies at the U.S. Department of Defense to a timeline of data removal requests.

Anonymous also published a memo, address to "Citizens of the World," as a preface to the leaked documents.

Anonymous has obtained some documents that "they" do not want you to see, and much to "their" chagrin, we have found them, and are giving them to you. These documents prove that the NSA is spying on you, and not just Americans. They are spying on the citizens of over 35 different countries. These documents contain information on the companies involved in GiG, and Prism.

On the other side of the coin, President Obama ( following suit from other government officials ) has spoken out in defense of the program, asking the American people to trust that the data is being used for national security purposes.

UPDATE: Turns out that some of the documents Anonymous included in its round-up of NSA-related files this morning might have already been available to the public for some time now.

For example, a PDF from the U.S. Department of Defense about the NetOps Strategic Vision has actually been online since September 15, 2012, based on data from the Internet Archive WayBack Machine.