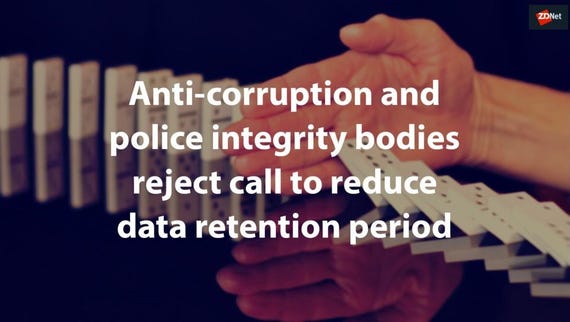 Butler said of those 459 requests, 276 were to specifically find out a name associated with a telecommunication service.

Australia’s encryption laws: An insider’s guide Australia now has world-first encryption laws. This guide explains what the laws can do, what they cannot do, and how Australia ended up here.

"At the moment, we're collecting data on six telecommunication services, and it all relates to criminal activity by police officers and we believe it's worthwhile," he said on Friday.

The LECC is an independent body that investigates misconduct and malice administration within the NSW Police Force and the NSW Crime Commission.

With calls from the likes of the Human Rights Commission to have the minimum duration of data retained reduced from two years to a maximum of six months, Butler said such a reduction could potentially compromise LECC, and other law enforcement investigations.

The LECC accesses data older than two years, and Butler said it does rely on that for some of its investigations.

"More than half of our requests relate to data that is more than six -- well, where the data is dated, there is a lot of undated data -- more than 50% is over six months old, and around 20% from last year was over two years," Butler added.

Executive director of operations at the Australian Commission for Law Enforcement Integrity (ACLEI) Sarah Marshall has likewise rejected calls for the retention period under the laws to be reduced, saying many of the investigations her agency undertakes require access to historical data.

"The nature of corruption is that it almost always occurs in secret, meaning that is rarely uncovered immediately, often coming to light only months or even years after the event," she said.

"The overwhelming majority of ACLEI's investigative work stems from the discovery of indicators of historical conduct. There is often a considerable period between the time corruption begins or occurs, its evolution, its discovery, and then eventually it being reported."

"If this were to become a reality, ACLEI's work would be even more difficult than it already is," she said of reducing the retention period.

Not only does ACLEI have access to telco data under the Act, it also has jurisdiction over Commonwealth law enforcement agencies, which themselves have significant powers and access to sensitive information.

Last year, over 45% of ACLEI's authorisations were for data in excess of two years.

Marshall pointed to an investigation that came to light in early 2018, regarding possible corrupt conduct back in 2015-16. In order to properly investigate the corruption issue, she said metadata dating back to 2015 was required.

She said while some telecommunications providers happened to retain that data, and ACLEI was able to obtain it, others didn't, and that impacted the investigation.

ACLEI in 2017-18 and 2018-19 paid approximately AU$84,000 to telecommunications providers to obtain data in support of investigations.

Butler asked the PJCIS to consider amending Section 68 of the Telecommunications (Interception and Access) Act to allow the LECC to "disclose lawfully intercepted information which we regard as much more intrusive to police for the purpose of disciplinary proceedings, or the purpose of the police commissioner to consider the suitability of a police officer".

"And we can also under that same section disclose lawfully intercepted information to police or other agencies for their criminal investigations," he added.

Butler later clarified that currently the LECC can communicate the data if a judicial process is underway, but if it's a disciplinary process within the department, it's prohibited from making that data available. It wants to be able to do the latter.

Where over the top (OTT) communications platforms, such as WhatsApp and Signal, are concerned, Butler said while the LECC is not able not to access the content of those communications, it gets "an appreciation for their use".

"It is absolutely true that many of our targets use over the top services, particularly I think, with our crime types, the law enforcement officials are very surveillance aware. So they certainly would use encrypted communications to conduct any criminal activity," he said.

"Access to telecommunications data has been a fundamental tool ever since I've been in law enforcement -- over 20 years. There's obviously a degradation of the effectiveness through the use of OTT services. However, I would say at this current point in time, we still rely heavily on an analysing telecommunications data."

ACLEI said it has kept, and not destroyed, all of the data it has accessed under the scheme.

MORE FROM THE HEARING