I just want you to be happy and, it seems, Apple is finally coming around to that way of thinking. 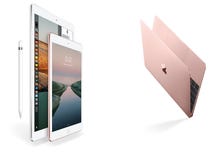 iPad Pro vs MacBook: Which to buy and why Weighing getting a svelte MacBook against an iPad Pro? I just went through the decision tree myself. Here's what I learned - and bought.

For the longest time, Cupertino insisted the iPad Pro is a computer. Then it seemed to back off, as its EVP of worldwide marketing Phil Schiller admitted it wasn't a PC replacement.

But now that Apple has found the magic to attach a keyboard and trackpad to the latest iPad Pro, it's released the definitive -- and really quite amusing -- answer to an annoying debate it started in the first place.

Two new ads for the iPad Pro reveal Apple in an almost self-deprecating mood. But not quite.

The first explains that the new machine is your next computer, but it's not a computer. Yes, it's faster than most PC laptops -- according to Apple -- but you can touch the screen and even gear yourself up for an augmented reality. Which many of us rather need currently.

It's all perfectly presented, in a very Apple way.

The second ad, however, tries to tug at your emotions a little more. It really is quite funny, in a this-time-we're-sure-of-ourselves kind of way.

It purports to be a beginner's guide to proper computing. And, finally, it begins to lure those who use a laptop on their laps. (Guilty.)

A posh British voice from circa 1946 offers the basic instructions for correct computer use, while enterprising young things from 2020 show just how they can disrupt this ole' computing thing with their new machine.

Here, for example, is the sudden lack of a boring arrow cursor. Now you can have a mysterious dot that looks like it came from a mischievous laser pointer.

Perhaps most extraordinary is that Apple even tries to push the camera on the iPad Pro.

Personally, I still struggle with people who hold up their lumbering tablets in order to capture an aggressively hungry seagull. Yet here is Apple encouraging it.

I confess to being at least slightly tempted by this new -- and wonderfully expensive (the case for the 12.9-inch version is $349) -- iPad Pro configuration.

Now, your choice of computer is finally a matter of personal style. I'm glad we've finally sorted that out.

Join Discussion for: Apple finally decides the iPad Pro is a computer...