Full Bio
Posted in Between the Lines on March 15, 2016 | Topic: Government

Apple had harsh words for the Justice Dept. in a court filing on Tuesday.

Responding to the government agency's filing on Thursday arguing Apple should comply with the court order to unlock the San Bernardino shooter's iPhone, Apple says the Justice Dept. is violating the Constitution.

"According to the government, short of kidnapping or breaking an express law, the courts can order private parties to do virtually anything the Justice Department and FBI can dream up,'' Apple's attorneys wrote in the court document. 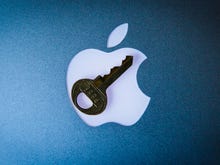 "The Founders would be appalled," added.

The filing is the latest before the first court hearing on March 22, escalating Apple's position that it shouldn't be compelled to help unlock the terrorist's iPhone.

The battle started in February when the FBI sought and won a motion to compel Apple to write new software that would allow federal agents to beat the security feature that erases the data on the terrorist's phone.

The phone was used by Syed Farook, who along with his wife, Tashfeen Malik, murdered 14 people in San Bernardino, California in December 2015.

Apple further asserted the ruling "shows the government misunderstands the technology and the nature of the cyber-threat landscape," and the All Writs act the Justice Dept. is citing is not supported by any prior cases.

Apple has been uncharacteristically public in its stance against the Justice Dept, with executives appearing in the media and statements posted for customers on its website.

"Specifically, the FBI wants us to make a new version of the iPhone operating system, circumventing several important security features, and install it on an iPhone recovered during the investigation. In the wrong hands, this software -- which does not exist today -- would have the potential to unlock any iPhone in someone's physical possession," Tim Cook wrote to customers in February.

Cook said the would have "implications far beyond the legal case at hand."

The company said it will oppose the order in court.

Join Discussion for: Apple: Founding Fathers 'would be appalled'...