By Zack Whittaker for Between the Lines | February 9, 2015 | Topic: Mobility

Apple's deal with IBM may soon expand, as rumors continue to swirl that a larger 13-inch iPad aimed at enterprise users could land later this year.

UBS analyst Steve Milunovich said in a note to investors that he believes Apple and IBM will expand their mobile enterprise app offering to the wider enterprise beyond its initially-chosen verticals. 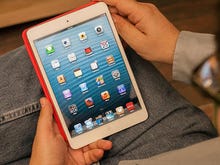 To recap: Apple and IBM are rolling out more than 100 exclusive industry-specific apps for iPhones and iPads. So far, the deal has seen 22 apps developed for seven crucial vertical industries, as of its fiscal first quarter earnings. Apple said it will add three more verticals, including healthcare.

Milunovich said there is "upside potential" to the deal "given the importance of mobile to IBM and enterprise to Apple."

"Now we hear that IBM will be adding horizontal apps as well over time, such as supply chain capabilities," the note read. "IBM has been backing into applications through its [software-as-a-service] acquisitions and analytics expertise; this could be powerful.

Milunovich speculated that a larger 13-inch iPad could "play into the enterprise push."

Apple's iPad growth is slowing down. Consumer users of iPad don't need to upgrade every year when a minor iterative design change or tweak comes out. There has been nothing substantially different about the iPad in about three generational cycles.

But also enterprise customers are relegating the tablet to internal test-beds. Around 99 percent of the Fortune 500 use iPads, and yet its penetration rate is just 20 percent.

Apple chief executive Tim Cook said on the company's fiscal first-quarter call that he is "very optimistic" on iPad over the long-run, particularly for first-time buyer rates. He added that the IBM deal is helping Apple to "win" new customers -- particularly with its iPad division.

But it's not enough. Apple is selling fewer iPads.

That's where a larger iPad comes into play. If, as rumored, Apple will compete with larger tablets on the market, notably Microsoft's Surface Pro 3 which lands in at 12-inches, it could target an entirely new enterprise user.

Though the deal is progressing well with verticals, Apple has to maintain its end of the deal. And that deal may only succeed if Apple targets a market hungry for larger tablet displays.

By Zack Whittaker for Between the Lines | February 9, 2015 | Topic: Mobility