Amid mounting speculation about Apple ditching the 3.5mm headphone jack with its next iPhone, the company now seems to be exploring more space-efficient internal speakers.

Apple has been granted a new patent that may offer an explanation for how it plans to improve or at least maintain audio quality on internal speakers as it seeks to build ever-slimmer iPhones. 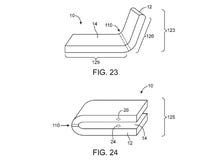 The patent comes amid some panic over the possibility of Apple dropping the 3.5mm headphone jack on the 'iPhone 7' in exchange for a setup in which headphones are connected wirelessly via Bluetooth or via the Lightning port.

If Apple were to drop the headphone jack, it could make for a thinner iPhone or give it more space for a bigger battery, obviating the need for things like its hump-back silicon battery case.

Alternatively, as others have speculated, getting rid of the jack could allow Apple to make a shorter iPhone, by pushing TouchID to the 3D Touch screen, while maintaining the same size display.

In any case, were Apple to remove the headphone jack, either to slim down or shorten the iPhone, it still needs to engineer decent sound from a smaller space.

"As portable electronic devices get smaller and thinner, there are increased difficulties in providing the same or greater functionality in a smaller area," Apple notes in the patent.

Apple's answer, 9to5 Mac speculates, is to make other components in the device, such as a circuit board, part of the speaker to form an audio chamber that increases the volume of air it pushes out or channels sound more efficiently.

"The audio elements can be drivers (eg, speakers) or receivers (eg, microphones). In one embodiment, an audio element can be mounted on or coupled to an intermediate structure (eg, a flexible electrical substrate) having an opening therein to allow audio sound to pass there through," Apple states.

"In another embodiment, an audio chamber can be formed to assist in directing audio sound between an opening an outer housing and a flexible electronic substrate to which the audio element is mounted or coupled thereto."