The rivalry between two of the world's largest technology giants may be back on after years of dormancy, collaboration, and kind words. 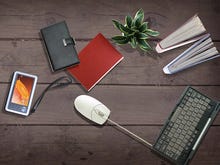 The very best tech you can buy for $200 or less Buying tech on a budget? These 15 gadgets are the very best on the market for their price — from speakers to content streamers, coffee machines, and computer peripherals.

Apple has opened up a pre-release web-based version of its iWork software to Windows users, apparently taking aim at Microsoft's own home-brand Office software suite.

Office's web-based apps are only available with an Office 365 subscription, which costs users a modest fee each month. (Office Online, however, is free.) Apple's web-based service is currently for free, though there's no guarantee it will stay that way.

Apple launched iCloud in mid-2013, allowing its iPhone, iPad, and Mac users to tie their data together through the company's own cloud solution. Since then it's expanded to include documents, music, and other content.

Now that iWork has been ported to iCloud, anyone with an Apple ID username and password can login to iCloud to use web-based versions of Pages, Numbers, and Keynote, which are also compatible with Microsoft's document formats.

iWork also works with iPhones and iPads, allowing you to make changes on your mobile device and have the changes automatically added to the cloud.

Join Discussion for: Apple opens up iWork to Windows users for...