Apple's few months after the December holiday sales period is typically a quiet one. Not so much this time around.

The Cupertino, Calif.-based technology giant reported Monday fiscal second-quarter profit of $13.6 billion on earnings of $2.33 per share (statement). Revenue for the quarter was $58 billion.

Apple beat both sets of Wall Street expectations: analysts wanted $2.16 per share on revenues of $56.06 billion.

By the numbers (average professional analyst estimates are compiled by Fortune): 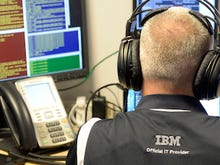 Inside the Apple-IBM deal: How will it work, and what to expect The Apple-IBM deal set aside decades of rivalry to forge a new path into tapping the enterprise market. But some key industries will miss out. Here's why.

International sales accounted for 69 percent of the company's revenue.

In prepared remarks, chief executive Tim Cook said the company's quarter was powered in part by "continued strength" of the iPhone, Mac, and its various app stores.

He added: "We're seeing a higher rate of people switching to iPhone than we've experienced in previous cycles, and we're off to an exciting start to the June quarter with the launch of Apple Watch."

Apple also issued a cash dividend of 51 cents per share, payable mid-May. It's part of Apple's $200 billion capital return program, which the company announced alongside earnings.

Shares in Apple ($AAPL) closed up 1.7 percent on the Nasdaq in New York. In after-hours trading, shares were up 2 percent.