It has been about 10 months since Apple's famous out-of-nowhere management upending, just weeks after announcing the latest shiny rectangles of various sizes ahead of the December holiday season.

While many were looking at the apparent ousting of senior vice-president for iOS software Scott Forstall from the executive team ranks, many overlooked John Browett's departure , who managed the company's retail store efforts — most notably leading the push into China. 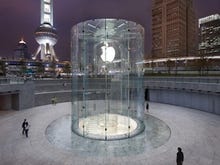 Apple hires retail chief in one interesting experiment John Browett doesn't have a lot of fixing up to do with Apple's retail stores. On the flip side, he could be the one that botches a well-oiled machine.

Now, the Cupertino, Calif.-based technology giant is apparently waking up to the idea that there may be a connection between a lack of a retail chief and falling sales.

Browett's resignation couldn't come any sooner. This is considering that Apple spent the best part of six months unraveling some of his policies. Some were radical and others were off the mark. Some downright frustrated leadership, and some even annoyed customers, according to a report by The Wall Street Journal.

Almost a year later, senior Apple executives are unclear as to how its retail stores should operate. Despite policy rollbacks to a time pre-Browett, the status quo requires some level of maintenance.

What's clear is that it has to be sooner rather than later. Apple recently reported the first sales dip in years. While sales are still high and stable on the whole, despite a rocky global economy and tight customer pursestrings, cracks are beginning to show around the edges of Apple's retail strategy.

Breaking down the numbers:

That's 3,000 per store per week in lost customers, despite a 10 percent increase in brick-and-mortar retail stores numbers.

And according to the Journal, Apple's store sales per square-foot have fallen over the last year from $4,754 to $4,542, which is just shy of a full 5 percent drop.

There's no doubt that numerous gears and cogs are at work. A lack of retail leadership is just one, albeit a significant factor. And Apple, of all companies, cannot afford to trim any aesthetic or use cost-reducing methods that Browett initially put over the company's top priority marker: customer experience.

Apple management reshuffle: The who, the why, and the next Two significant senior Apple executives are out of the technology giant without an explanation. Who will win out of the management shuffle, and who could be vying for the chief's chair next?

Apple has to maintain customer experience above all else; one of the very reasons why the effects are Browett's tenure can no longer be felt. His focus on a U.K.-based technology retailer did not meld with the high brow, refined, and carefully-crafted and orchestrated experience that customers feel when they walk into Apple stores.

It ultimately boils down to investment, something Browett wanted to avoid. He wanted to cost cut, and cost cutting has not typically entered Apple's sight for some time. It hasn't needed to and it doesn't want to.

Focusing on high margin, perfectly-sculpted designs, the company bucks the trend of plowing money into areas of innovation, research, training, and development. And not just in its products. The Journal reports that Apple store "educators" were reportedly told to join the sales teams on the floor as part of Browett's slew of changes to the experience model. Just as an example alone, it can afford to offer free pre- and after-sales educative care to prospective and actual customers.

But that finely-tuned algorithm of ticking all the customer satisfaction boxes can easily go unchecked when the customer isn't the first and foremost on the business' mind.

For now, customer service has one again become the "mantra" of Apple retail. Though stores never dwindled in friendliness and openness, design and character, priorities have refocuses on the customer themselves.

Does Apple need a retail chief, based on what we now know? Likely not. But if it did, it would be a plate-spinning job. To keep the status quo intact, and chugging along like a finely tuned machine.

Join Discussion for: Apple shows signs of sales stress: Is a missing...