In case you fell out of the loop, Apple is to hold an event on Tuesday at the Yerba Buena Center in San Francisco, California, where the company is expected to announce its latest hardware. 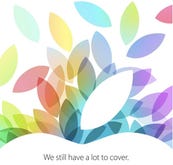 Apple's second big product launch in two months is on tap and all eyes are on the iPad mini and how the company prices the current one.

The technology giant, aside from launching its next-generation iPad, is expecting to announce new MacBooks to coincide with the launch of OS X Mavericks .

We may also see a new Apple TV set-top box, and if we're lucky, hear what's on deck for the coming quarter, which Apple chief executive Tim Cook  previously made clear on its fiscal second quarter earnings call in April.

For those who want to follow along with the event, Apple will be streaming the announcement live from Apple TV devices, and from its website.

From the main screen of the Apple TV, users can scroll down to find the "Apple Events" slide.

For web users, users must watch the stream online with Safari on iPhones and iPads running iOS 4.2 or later, Safari 4 or later on OS X 10.6 or later, or on an Apple TV (second, third generation) set-top box with software 5.0.2 installed or later.

But, if you're at work or away from the screens, you can keep up to date with breaking news from ZDNet throughout the day, or by following @ZDNet on Twitter. You can also keep track of events live from sister site's CNET live blog on the ground.