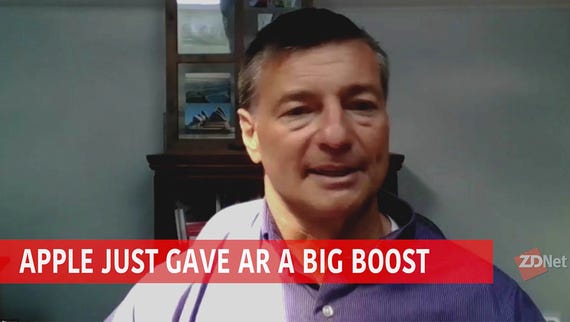 My hands on with the HoloLens 2 last week left me thinking I had experienced the future of computing. However, it reaffirmed my concern that Microsoft is vulnerable in terms of its leadership in the space.

The design of the HoloLens 2 itself reveals the source of some of this consternation. To achieve better balance on the head, Microsoft has moved the computing and battery components to the rear of the device. That makes a lot of sense; there's no need for them to be weighing down the front of the device. That said, there's an argument that it should not be weighing down the device at all. Indeed, promising but lumbering Magic Leap has reassigned such electronics to a puck designed to be worn on one's waist, enabling the head-mounted part of its device to be as light as possible.

CEO Nadella talks Microsoft's mobile ambitions, Windows 10 strategy, HoloLens and more Microsoft CEO talks about his thinking around product differentiation and being ahead of the curve in this Q&A with Microsoft watcher Mary Jo Foley.

Magic Leap, though, represents but one of the potential challengers to Microsoft, and a long shot at that. Indeed, while Microsoft has shipped a relatively small number of HoloLens headsets, it reaching a second generation is milestone given the long history of industry setbacks including Google Glass, the scuttling of Intel's Vaunt project and recent layoffs at smart glasses startup North.

Indeed, if one were to discount specialized hardware for a moment and simply look at developers' consumer opportunity, it's clearly with Apple. Recent rumors that its AR headset could materialize as soon as the end of this year would align with three opportunities. The first two of these are continued improvements to ARKit that could be announced as this year's WWDC event and the introduction of a new iPhone that represents another leap in processor generations for Apple.

The third would be adoption of a nascent short-range wireless technology that is part of the Wi-Fi 6 standard: 802.ax. The latest iteration of the long-simmering 60 GHz Wi-Fi variant once known as WiGig, 802.11ax promises to enable short-range virtually latency-free mutligigabit data transfer between devices and remote video displays. This is a capability tailored for technologies such as VR and AR, one that should yield a far more satisfying experience than the VR smartphone shells such as Samsung's Gear VR and Google's Daydream or the PC-tethered options from the likes of Lenovo and Acer using Microsoft's approach.

Also: Microsoft HoloLens 2: Everything developers and IT pros need to know TechRepublic

Without anticipating any further innovations than these, an Apple AR headset paired with a next-gen iPhone could yield a significant pricing advantage. It would have considerable headroom to compete with the HoloLens 2 even with the sunk cost of a an iPhone coming in at about $1,000. It's the most obvious kind of product that would fulfill newly rebranded CEO "Tim Apple"'s promise of pipeline products to "blow you away."

At least in the short-term, this would hardly be a death blow to Microsoft's HoloLens efforts. In fact, the company not only seems to accept such imminent competition but is anticipating it. This is evident in its embrace of cross-platform mixed reality experiences that an Apple headset would presumably slide into as well as a greater focus on the cloud infrastructure and business application development around mixed reality than on the HoloLens hardware business itself. It might be tough for Microsoft to see yet another technology category it entered early ultimately made a hit by its longtime rival. However, at least this time the company's success metrics aren't contingent on it being the device unit volume leader, a position in which it has never found a sustained footing.

The HoloLens 2 is a huge step forward from the original that does more to realize the promise of mixed reality than anything before it.

The wide-ranging patent application for augmented reality tech hints at a possible headset from the iPhone maker.

Join Discussion for: Apple's augmented reality end run: Can it...