Apple's new retail store on New York's upper west side looks more like a Best Buy or a Lowe's than an Apple Store – which is a shame.
Written by Jason D. O'Grady, Contributor on Nov. 12, 2009 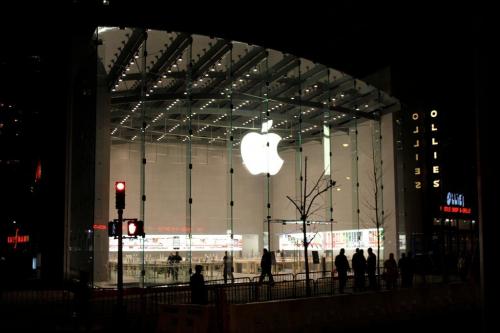 Apple is in the process of unboxing a brand-new retail store in New York City's upper west side. According to ifoAppleStore the public opening is scheduled for Saturday November 14, 2009.

At night the store is a beacon visible for several blocks, especially for those approaching by car or on foot from the south. The glow of the ceiling lights, the backlit logo and the back-lit wall graphics are brighter than anything on Broadway. As you approach closer, the towering height of the storefront becomes apparent. Once in front of the building, you realize that Apple opted not to create another Boston or Regent Street (London) store, with a mezzanine level. They took the Scottsdale Quarter (Arizona) store and did it one better -- this single space is about two and one-half times the volume of the Scottsdale building, and with a second level hidden away below ground like Fifth Avenue (NYC).

The giant warehouse format is a bit of a departure from the large Apple stores in Boston and London and begs the question: did Apple just become another "big box" retailer -- like Best Buy?

I haven't seen the new store in person, so I'll reserve judgment, but I'm more in the "big box" camp with this latest installment.

What do you think about Apple's latest retail monolith?

Update: ifoAppleStore has posted a photo gallery of the store.