Apple's Continuity Webcam changes everything: Here's how to use it

For once, I'm happy to be running developer betas of the latest iOS and macOS versions. So long, dedicated webcams!
Written by Jason Perlow, Senior Contributing Writer on June 7, 2022 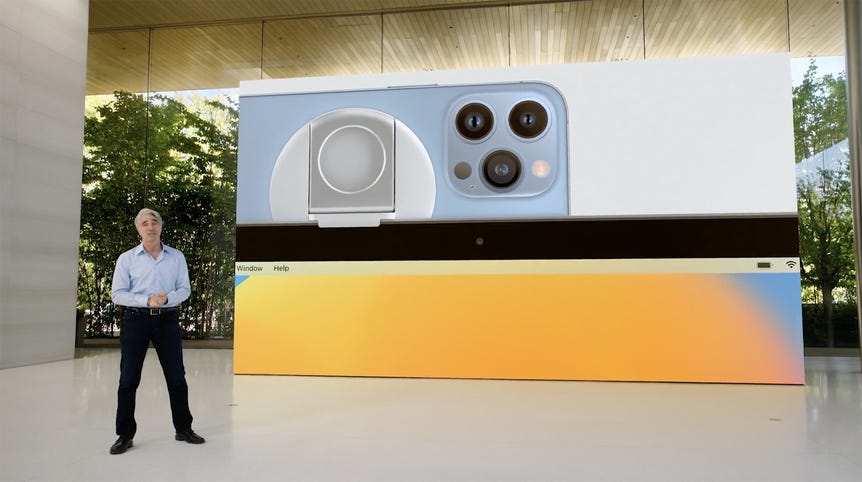 During early beta testing, buggy code and broken apps far outweigh the novelty of new features and enhancements. That's certainly been my case in the past when putting early builds of iOS, iPadOS, and macOS to the test.

The pandemic lockdown will leave a legacy of increased remote working, so it's a good time to upgrade your webcam. Here are ten leading contenders.

But this time, I'm happy I took the plunge into the developer betas for iOS 16 and macOS. Why? The Continuity Webcam.

I've thought for years that there should be an easy way to turn our expensive smartphones into high-resolution webcams. Why spend $200 on a dedicated device from Logitech, Anker, or Microsoft if you've already got a powerful camera sensor built onto your phone? Why take up a perfectly good USB port on your docking station for your laptop or for your desktop computer? Why not charge your smartphone and use it as a webcam at the same time?

But nobody has been able to implement that easily -- until now. Apple's Continuity Webcam changes everything.

You'll need to be on the iOS 16 and macOS 13 Ventura developer builds to make this work, but it's pretty easy. First, you'll need Bluetooth and Wi-Fi turned on with both devices, and they need to be signed into the same iCloud account. That's it. If you ever need to reset the function, it is located in Settings > General > AirPlay & Handoff.

The iPhone doesn't need to be plugged in or charging on MagSafe, but I'd recommend doing that for longer calls or recording sessions. You simply prop up your iPhone, either in portrait mode or in landscape mode, with the rear camera facing you. Then, in the settings for whatever app is going to record the video, such as Zoom or Facetime, switch to the camera with the name of your iPhone.

In Zoom, the camera even supports special effects. When the camera is active, you can also find the Mac's Control Center (upper right of the screen next to the Siri icon) and choose "Video Effects" for Portrait Mode; Center Stage, which tracks your head and face (this works even if the phone is upright and in Portrait or on its side in Landscape); Studio Light; or Desk View, which requires the phone to be positioned above the monitor to work well.

The camera's speed is unbelievably fast, and I've seen no perceptible lag on my home network -- even when using different Wi-Fi access points for the Mac and the iPhone. I am using the latest-generation Linksys and Eero Wi-Fi6 hardware, so your mileage may vary.

I'm looking forward to the evolution of this feature and the third-party accessories that use it. I hope we see similar efforts from Microsoft and Google to implement this with Windows 11, Chrome OS, and Android.

Have you used Continuity Webcam in the MacOS and iOS developer builds yet? Talk Back and Let Me Know.