Apple's iPad vs. Amazon's Kindle: It's not zero sum

Amazon provided its most detailed figures on sales of its Kindle put the units in the marketplace in the millions. The big questions: How long can Amazon can defend its turf vs. Apple's iPad? And will consumers consider the iPad and Kindle to be two completely different devices with different use cases?
Written by Larry Dignan, Contributor on Jan. 28, 2010

Amazon provided its most detailed figures on sales of its Kindle put the units in the marketplace in the millions. The big questions: How long can Amazon can defend its turf vs. Apple's iPad? And will consumers consider the iPad and Kindle to be two completely different devices with different uses?

The e-commerce giant on Thursday reported another strong quarter, but the highlight of the financials and the call may have been at least some details on Kindle sales. Due to an accounting change where Amazon can recognize more Kindle revenue up front, the company had to offer a little more detail than usual about sales. Granted, Amazon didn't offer much, but CEO Jeff Bezos said in a statement:

Millions of people now own Kindles. And Kindle owners read, a lot. When we have both editions, we sell 6 Kindle books for every 10 physical books. This is year-to-date and includes only paid books — free Kindle books would make the number even higher. It’s been an exciting 27 months.

We think we are focused on the customer, and I think when you look at Kindle, that's a -- certainly a good example of that. We think we built a nice -- very nice purpose book -- purpose device, and that's -- excuse me, that's purpose built for reading. And we believe that readers deserve to have a dedicated device with great selection at great prices.

And then there's Amazon's annual report that notes $508 million of deferred revenue will be recognized over 2010 and 2011. If you assume, most of that deferred revenue is related to the Kindle---something analysts were trying to figure out on the conference call---you come up with some kind of guesstimate. In any case, the Kindle is nothing in the grand scheme of $24.5 billion in annual revenue Amazon brings in.

Susquehanna Financial Group analyst Marianne Wolk reckons that Amazon has sold 2.3 million Kindles so far and will ship another 4 million in 2010. Analysts expect Apple to ship anywhere from 1 million to 5 million iPads in calendar 2010.

And if you look at AT&T's most recent quarter, the company snared many wireless subscribers via emerging devices like e-readers. You could bet that many of those subscribers were due to AT&T's contract with Amazon on the Kindle.

The Amazon’s Kindle eReader is targeted at Amazon’ most active book customers, the avid readers that buy 30+ books per year. The device is optimized for reading and clearly lacks some of the bells and whistles of the multi-purpose category. Thus, the Kindle (2 or DX) is a great reading device featuring eInk, long two-week battery life, and free wireless to buy a new book instantaneously. We believe Amazon will be effective at retaining these customers with the Kindle, a wide selection of eBooks and its recommendation engine – which leverages a 10+ year history of book purchases and personalized information about its best book customers.

Toss in Amazon's customer service, store, better prices and a few wild-cards like apps for the Kindles and the company should hold its own against the iPad. Yes, Apple's iBooks store is a competitor in the long run to Amazon, but I'd put my money on the e-commerce expert in that battle.

Note the language of Szkutak. The Kindle is a "purpose device." It's built for reading. It's a book. And it does that well. You can take the Kindle to the beach and read. It's easy on the eyes.

The iPad obviously does more---games, music, video and yes books. The iPad is aimed at netbooks and e-readers.

What gets fuzzy quick is whether the iPad and Kindle are truly on a collision course. You can spin in a circle and hit someone that thinks the iPad will render the Kindle useless. These folks argue that multipurpose devices will trump the Kindle and e-readers. These devices are relics. 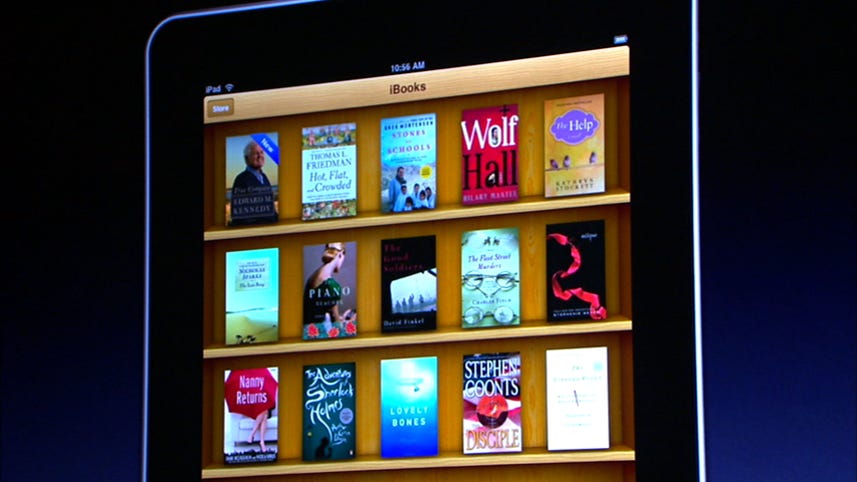 However, it's not that simple. After giving the iPad vs. Kindle battle some thought---I basically held my Kindle purchase to scope out the iPad---I'd argue these devices may converge at some point, but for now can coexist.

As noted before, iPad's impact on the Kindle is really a 2011 story. In 2010, the devices will compete, but indirectly.

We believe Amazon sold 1 million Kindles in the quarter vs. our previous estimate of 750k. Kindle competition from Apple's iPad may weigh on Amazon's multiple, but is not expected to impact Amazon's business in 2010.

The concerning math to investors is 49% of Amazon's business is media, and as media goes digital, Apple has an opportunity to steal share of the fast growing segment with its iTunes/iBooks. For 2010 we estimate 30% of Amazon's total revenue will be print books (26 million titles), and 2-3% will be digital books (414k titles). These estimates are based on the 80/20 rule, 80% of book revenue comes from 20% of titles. The bottom line, while the iPad will take share from Kindle in 2011, we believe the digital books segment (we estimate growing 122% in 2010), is too small to move the needle in 2010.

But is it really a zero-sum game?

Maybe not. For every person that thinks the iPad will displace e-readers, there are people that like their Kindles, nooks and Sony Readers. It may be a question of screens. It may be a question of getting lost in a book. But the point of e-readers---you use them to read may continue to hold weight. Perhaps e-readers just become a device for old fuddy duddies, but they won't disappear overnight and have a solid use case.

In my own buying decision, I'm just as confused as I was before the iPad launch. Do I want an e-reader that's cheaper and has 3G built in yet can do only one thing well? Or do I want another device that does a lot of the same things my phone and laptop can do?

Simply put, the iPad doesn't cure much for me. It doesn't replace my iPod. It doesn't replace my laptop when traveling. I still need the phone. In a nutshell, it's another device to carry around. Do I need another 10-inch screen? The Kindle's 6-inch screen is lighter, easier to toss in a bag and may just fit the bill. If I'm still stuck in a world of multiple devices I'm going with the one that's the size of a paperback book.

Frankly, I just want a series of paper-thin screens that can tether to one computing device and break off depending on the use case I needed at that very minute. We're building an arsenal of gadgets largely over the size of a screen.

Oddly enough, I'd be more interested in a 6-inch iPad than the 10-inch one. If I can't consolidate devices at least make lugging it around easier. Meanwhile, I'm still not sure I can read the iPad on the beach or the deck without some serious eye strain.

Now note, I'm still evaluating all of this and frankly may just hold out a lot longer---say second-gen iPad, which will inevitably be cheaper. And if Amazon dropped the Kindle price to $199 and added ePub support, I'm in the Kindle camp. Simply put, there are a few moving parts here and price is a big lever.

Though iPad's $499 seems comparable to Kindle DX's $489, Kindle bundles unlimited 3G access in its price. An equivalent functionality on iPad requires users to pay an additional $120 for a 3G modem and $30/month subscription for unlimited 3G access-- a price point that may not be compelling to users who want a dedicated, simple reading device.

Squali also notes that Amazon is very likely to cut prices for its Kindle.

Bottom line: Don't rule out the Kindle or the e-reader. It's all about price and the use case.

Related: Report: E-reader sales will surge at the $150 price point