Having spent the better part of the past month using Google's Pixel XL smartphone, I still think Google made one of the best phones of the year.

I have zero hesitation recommending either Pixel phone to a friend, family member, or a complete stranger when asked. In fact, my recommendations as of right now are the iPhone 7 Plus or Pixel XL. You can't go wrong with either one.

The Pixel's camera takes crisp photos and is incredibly fast. The phone itself is a workhorse, with long battery life and practically no slowdown even as it's pushed to its limits.

However, what I find most appealing about the Pixel isn't something you'll find on the spec sheet. It's that, for the first time, there's an Android phone that's also the best Google phone money can buy.

That may sound absurd, but hear me out.

As someone who is deeply rooted in Apple's hardware and Google's software, I've long said the best Google phone money can buy is the iPhone.

Granted, the apps often lack some key functionality, and it feels as if Google has given up on keeping pace with Apple's latest software features and design guidelines. For example, last week's update to the Gmail app was the first major update in nearly four years. At the end of the day, however, the apps are available and usable.

With so many variables and inconsistent experiences across Android devices (Samsung pushing its services alongside Google's; LG still trying to make heavily customized Android skins work; the Nexus line struggling to find a purpose), a true Google phone has never really existed. Android devices up until now have primarily been a mishmash of two different approaches butting heads, hoping to make two companies some money along the way.

Apple's hardware design and reliable camera combined with Googles' apps running on iOS made the case all on its own.

Everything about the Pixel is unapologetically Google.

Starting with the G logo on the back to the startup animation centering around Google and not the familiar green Android robot, Android has taken a backseat to Google when it comes to the Pixel.

Adding to the value of Google's phone is the fact that Google Assistant is -- for the time being -- exclusive to the Pixel. Furthermore, Google Photos now offers unlimited video and photo backup for Pixel owners.

Assistant and unlimited Photos storage are two services those who are entrenched in Google services won't find on the iPhone or another Android device.

Google somehow persuaded Verizon to treat its phone as an equal to the iPhone by pushing out OS updates at the same time Google does. Monthly security updates are a vast improvement over the past Android experience of hoping you'll one day, eventually, maybe, if you're lucky enough, get a software update on a competing Android device. The benefit of regular, timely software updates is something iOS users have long used as a battle cry to denounce Android (and rightfully so).

Google regularly updates the Android version of its core apps -- those same apps you can find on iOS -- with new features and design tweaks. Instead of waiting four years for meaningful update to Gmail, as iOS users just did, Pixel users will have constant access to the best implementation of Google's apps and services.

With Apple's ecosystem, the iPhone is arguably the centerpiece (as well as a gateway product) that ties together the entire Apple experience across the Mac, iPad, and Apple Watch.

As Google continues to push forward its newfound hardware initiative with products like Chromecast, Google Home, and Daydream View, the Pixel's importance as the centerpiece of the experience will continue to grow. 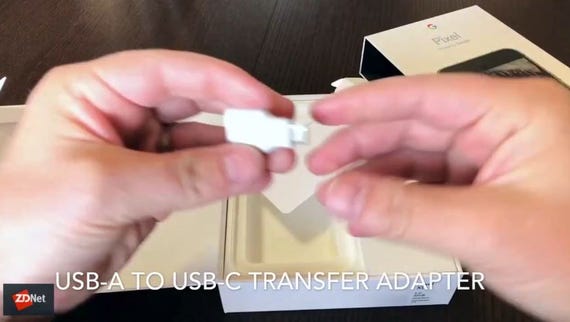 The OS version may say Android 7.1 Nougat, but this is very much Google's minimalist approach to a proprietary Android skin.

The Pixel launcher breaks away from the traditional app drawer, in favor of adding an extra app icon to the dock. A new search button sits next to a weather widget and the current date on the main home screen. The home button animates slightly at each touch, and the fingerprint sensor doubles as a trackpad to easily reveal notifications.

There are small tweaks and changes throughout the entire Pixel experience, all of which enhance the experience instead of distract from what the phone is capable of.

There's zero doubt in my mind that Google has a clear vision for what Android will become over the next few years; leading that transition is the Pixel.

With the Pixel, Google has matched the iPhone in hardware and software, and surpassed it as the best phone for Google services. For someone who wants the best Google experience possible on a smartphone, you aren't giving anything up by getting a Pixel over an iPhone. Actually, you have a lot to gain.

Join Discussion for: Apple's iPhone is no longer the best Google...