Updated: Tony Fadell, the senior vice president in charge of Apple's iPod division, is leaving the company to be replaced by Mark Papermaster, a former Big Blue executive who is being sued by IBM over a non-compete clause.The move (statement), first reported by the Wall Street Journal, marks the departure of one of the executives behind Apple's transformation into an entertainment and mobile handset company.
Written by Larry Dignan, Contributor on Nov. 3, 2008

Updated: Tony Fadell, the senior vice president in charge of Apple's iPod division, is leaving the company to be replaced by Mark Papermaster, a former Big Blue executive who is being sued by IBM over a non-compete clause.

The move (statement), first reported by the Wall Street Journal, marks the departure of one of the executives behind Apple's transformation into an entertainment and mobile handset company.  Fadell had his fingerprints on two of Apple's big hits: The iPod and the iPhone. You could argue that those two products transformed Apple into what it is today.

In a statement, Apple noted that Fadell is leaving the company for personal reasons and will remain as an advisor:

Fadell his wife Danielle Lambert, vice president of Human Resources, are reducing their roles within the company as they devote more time to their young family. Fadell will remain at Apple as an advisor to the CEO. Lambert will depart the company at the end of this year after a successor is in place.

Papermaster will take over the iPod and iPhone unit, a fact that may get him out of his IBM non-disclosure pickle. Papermaster was in charge of blade server development at IBM. You could argue that running the iPhone and iPod unit isn't competitive with blade servers.

Simply put, Faddell's departure is a big deal. And Faddell's move may become an even bigger deal if IBM can keep Papermaster from joining Apple.

But the larger issue here is the handicapping of CEO Steve Jobs replacement. Jobs isn't going anywhere at the moment, but recent press conferences may indicate that he's at least pondering a succession plan. Jobs has been yielding the spotlight to other top execs like chief operating officer Tim Cook.

While the Jobs successor is a topic of conversation among techies, it's unclear whether anything is imminent (it probably isn't). Nevertheless, Faddell was noted as a possible successor. VentureBeat's MG Siegler hits this theme and notes:

Not only are the iPod and iPhone huge businesses for Apple that Faddell was heavily involved in, he was on the short list of names regularly tossed around as possible replacements for current Apple chief executive Steve Jobs were he ever to leave the company. Perhaps no tech company is so closely tied to its leader as Apple, and shareholders will likely want to know that the person who takes over will be able to keep the money rolling in like Jobs has in recent years. Fadell was one of those people.

Left unsaid is that Papermaster isn't--at least at the moment. Executives Tim Cook, Phil Schiller and Jonathan Ive also took some of Jobs' spotlight at the recent MacBook launch, but it's unclear whether they could fill the CEO role. Cook could--and even wore Jobs' trademark outfit--but Jobs is one tough act to follow. Any turnover in the executive suite throws a monkey wrench into possible succession planning.Here's Sam's take on the Jobs succession planning: 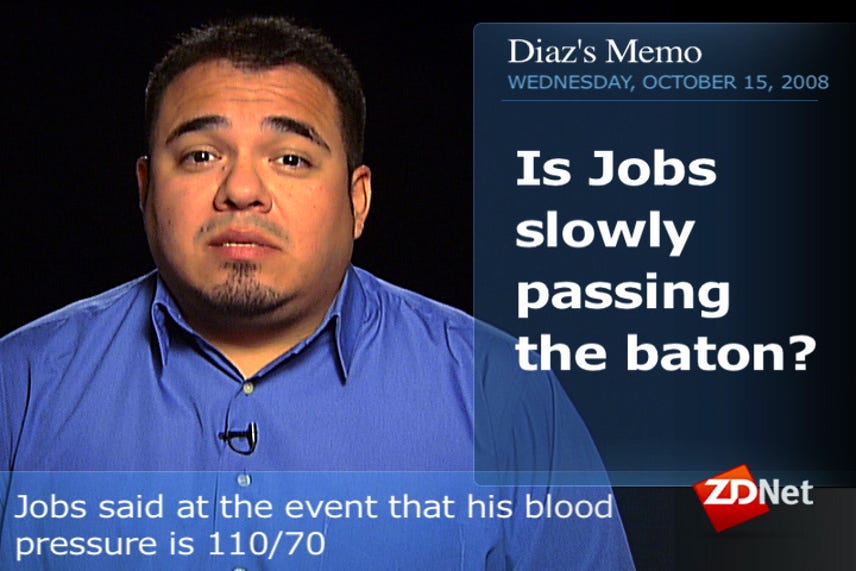