As you know, the robots are coming.

We've entered a stage of rapid acceleration in robotics development, and there's been a corresponding acceleration in doomsday prophecies. Manufacturing and service industry jobs will be the first to go, followed by healthcare positions and the creative economy jobs that were previously thought immune from automation. Another decade of AI research, some advances in robot manipulation and dexterity, and then goodnight, sayonara, game over. Economic collapse. Total ruin.

In that climate of negativity, it's refreshing when someone makes the exact opposite argument--even when that someone is a trade association with a stated interest in rooting for the robots.

This week, the Association for Advancing Automation (A3) released a white paper that "counters the misconception that robots are increasing unemployment." The paper, entitled "Robots Fuel the Next Wave of U.S. Productivity and Job Growth," draws on industry statistics, Bureau of Labor data, and anecdotal evidence from American manufacturers to build the case that automation will give the U.S. the best possible chance at re-shoring lost manufacturing jobs, increasing global competitiveness as BRIC economies mature, and raising employment numbers in the manufacturing sector in the long run.

Robot apologists, or the only cool heads weighing in? You decide. Jeff Burnstein, president of A3, gave me some time on the phone last week to discuss the paper, which you can download here.

Greg: What's the argument you're making, in a nutshell?

Jeff: It's that robots are not only driving employment growth by enabling companies to win new orders, but they also improve the work environment by taking away dull, dangerous jobs.

Greg: With regards to employment, I've been hearing a lot of arguments to the contrary.

Jeff: It's funny, three or four years ago, the International Federation of Robotics issued a study. It looked at robotics use in China, Japan, Brazil, and India. In these countries where robot use was accelerating, the study found that unemployment was falling. I thought that was compelling.

Then, all of a sudden, you had studies coming out saying robots were putting people out of work, and there was the Oxford Martin School study claiming that 47% of jobs are at risk of being automated. That didn't match what was being said by people we talked to on a daily basis who use robots. We wanted to know why those companies were using robots and how those robots impacted employment. That's why we did this paper.

Greg: One of the findings the paper rests on is the correlation between robots shipped and unemployment. Can you unpack that for me?

Jeff: Our first figure in the study went back to 1996. We looked at industrial robot shipments versus employment. We assumed that if robots were job killers, you would have expected that unemployment would rise when robot shipments rose. But we found the exact opposite. When sales of robots go up, unemployment falls. During the non-recessionary periods [the study looked at 1996-2000, 2002-2007, and 2010-2014] general employment and robot shipments both increased. To us that means that robots weren't killing jobs. The factors that lead companies to buy robots are the same factors that lead them to employ people.

Greg: That's compelling, but is that broad view correlation strong enough to make a claim that robots lead to greater employment in manufacturing?

Jeff: What the correlation shows is that the opposite view is incorrect. We're not saying that employment rose strictly because of robots. What we're saying is that the opposite can't be true. Employment rises and falls for many different reasons, but what we've seen is that automation is not correlated to unemployment in manufacturing as a whole. The real issue that we need to talk about, and the real threat to jobs, is American companies remaining competitive. If they can't remain competitive and stay at home, then we lose jobs. Robots help companies stay competitive.

Greg: Historically, declines in employment in American manufacturing, the auto industry or steel, for example, have been tied in the popular imagination to increases in automation. Do you see it differently?

Jeff: Very much so. What we think happened is that those jobs were being sent to low-wage labor countries. And I think that's well-documented. If companies would have automated, we would have a lot more manufacturing employees today.

If a company has one hundred employees and decides to automate to stay competitive, and then it has to get rid of fifty employees that are now redundant, it's very easy to say that we've lost fifty employees. But that's not the case in a world where companies need to stay globally competitive. The company that automated saved fifty American jobs that would have been off-shored. What happened in the auto industry is that companies were chasing low-cost labor instead of investing in automation at home.

Jeff: The simple answer is that quality is the real differentiator in a competitive world. For a long time companies felt that if they could chase low-cost labor they'd be all set. But to remain competitive you have to have tremendous quality, keep your manufacturing costs low, and ship to customer quickly. 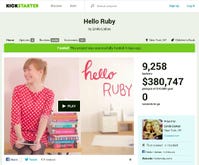 Penguins, robots, $387,000: The story of finding the secret recipe to get kids to love coding Hello Ruby, a Kickstarter-funded book to help teach kids programming, has raised hundreds of thousands of dollars - showing that getting young people into coding is a matter of feeding their imagination.

It's no coincidence that China is the fastest growing robot user in the world. That's not just because their labor rates are rising, but because companies know that if they're going to stay competitive, the demands are quality, flexibility, speed, and low cost. That's why some of this manufacturing can and has come back to the U.S. Automation can level the playing field. Companies that are closer to their customers can deliver more quickly. That's a reason to be very happy about the advantage that automation provides U.S. manufacturers.

Greg: Take us out with an imperative. What needs to happen in order for U.S. manufacturing to expand and prosper?

Jeff: We need to make sure we're training people for the jobs of the future. That's the number one thing manufacturers tell us. That's why the emphasis on STEM is important.

But also understand that the new manufacturing economy won't require all workers to have four-year degrees to benefit. Every one of our members say people right now don't have the requisite skills. Workers can get those at technical schools, at community colleges. These are good jobs, higher paying jobs, and they don't require four-year degrees. So we need to make sure we're providing ways to reach people so that they know these jobs exist. We need to get the word out.