Silicon Valley headlines often report on the size of venture capital raised by a startup -- the bigger the funding, the bigger the story. But this is a poor way to understand the startup community. Startup success isn't determined by how much you raise; it's about how much you keep.

Arena.im is a great example. It recently raised a seed round of $2.3 million -- a tiny amount by local standards. Thanks to bootstrapping by its founders, Arena's future is determined by how well it can please its customers -- its real bosses. VC money creates a second set of bosses and a reliance on further funding rounds.

With funding frozen during this COVID-19 crisis -- Arena is doubly fortunate.

Bootstrapping is a killer growth strategy

Bootstrapping allows poor ideas to fail faster while the best rise in value and can be hidden away from the limelight and therefore away from the competition.

VC money keeps unsustainable business models afloat longer than they should exist. And "zombie businesses" -- they are alive but not going nowhere -- waste people's talents in dead-end ventures.

Plus, VC funding rounds continually distract the attention of the founders at a crucial time.

VC money is certainly useful in scaling a business, but that's only when you have a proven and repeatable business model -- it's no longer needed for innovation.

VCs often mess up their own investments by funding too many me-too ventures following a successful pioneer. It's a shameful waste of resources, but a VC firm only needs one big winner among 50 failures.

If you can stay under the radar, you can avoid having to deal VC attention funding competitors. Bootstrapped and private -- no one knows how much money you are making. It's a great strategy to keep competitors out.

We know that the next big thing will come out of this economic downturn -- just as it has always done in the past. We know that it will come from an unexpected area -- and we know that VCs will totally miss it as usual.

The next generation of startups will come from self-funded and self-motivated founders solving painful problems in better ways.

A startup with millions in revenue 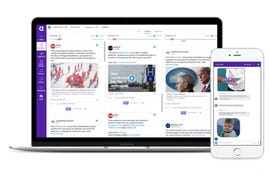 Based in San Francisco, Arena.im is a cloud-based media technology startup that received $2.3 million in a round led by Redpoint eventures and included Incubate Fund, Plug and Play, and Intango Ventures. It's a second seed investment for a total of $3.3 million.

Looking at the modest size of the investment, it might seem that the startup must be in its infancy -- yet Arena already has millions of dollars in revenues from nearly 10,000 customers in 120 countries.

Its founders managed to bootstrap their venture as much as possible, sleeping in their cars when necessary, being frugal and careful with money.

This frugality means they and their team keep the majority of the value they create, and they get to execute on their vision rather than be controlled by outsiders with their own goals and agendas.

Greg Gianforte, US Congressman for Montana, used to be a serial tech entrepreneur. He sold RightNow Technologies to Oracle in 2011 for $1.5 billion, and he is a big advocate for bootstrapping and avoiding VC money as much as possible.

I've interviewed Gianforte several times. He once told me that one of the top reasons to avoid early VC money is that your precious equity is cheaply acquired before there is a proven business model. It's the worst time to raise money because your valuation will be very low.

Plus, with VC money, you will quickly spend it and have to prepare for another funding round instead of working with customers to make sure the business offers real value.

Arena has achieved a remarkable momentum and is doing it mostly by bootstrapping. It's a great example for young entrepreneurs who want to launch a venture. You can start a successful company without any VC money.

My notes on Arena

I recently spoke with Arena CEO Paulo Martins, who co-founded the company in 2016 with Rodrigo Reis, CTO. Here are my notes:

Paulo Martins used to work at Hulu -- the TV show and film streaming service -- during its early years. He could see the challenges media companies and marketing agencies had in trying to reach audiences and target consumers.

Martins knew Rodrigo Reis from his Bachelor of Science in computer science studies in Brazil 15 years ago. When Martins left Hulu, Reis was near, working at Walmart eCommerce in Sunnyvale. They reunited and spent nearly three years brainstorming ideas and then building the tech infrastructure for what became Arena.

The goal was to offer a service for media companies to interact with and retain their audience on their own internet properties through various methods of real-time engagement.

Both founders have considerable software engineering skills, so there was no need to hire others. They worked in a very inexpensive shared office space in the heart of Silicon Valley, The Hacker Dojo, open 24/7.

Money conservation was paramount but that also translated into equity preservation. A double win.

Since its founding in 2016, Arena has become a proven platform for real-time audience interaction around live events, such as live blogging, and real-time content sharing. Clients can create targeted experiences based on first-party data gathered across a network of sites. Rogers Media in Canada runs Arena across more than 200 websites, seven TV stations, 56 radio stations, and 60 apps.

Japan Times is using Arena to engage readers over its COVID-19 coverage, and Fox Sports uses Arena to keep visitors on its sites much longer than normal. Arena's clients want to keep audiences on their media sites rather than trying to reach people through Google or Facebook. which do not share user data.

Martins said that demand has jumped incredibly this year thanks to the COVID-19 crisis. Media companies are rushing to try and shore up lost ad revenues.

It is not just media companies, large enterprise companies have signed up with Arena, such as Microsoft and Adobe. With the problems in the media industry and its downward spiral, Martins says corporate signups have jumped considerably because every company has to be a media company to a degree, and needs to attract an audience to its own web sites to build its online reputation and communicate with customers.

Arena allows its users to collect first-party data using a single-pixel technique. The first-party data is not sold but used to create "personal experiences" that help boost revenues through subscriptions, advertising, and help understand audience interests.

Martins says growth has been incredible this year. Arena finished 2019 with just over 2500 companies. In the first half of 2020,  9,435 companies are now customers -- a stunning jump by nearly a factor of four, and the year is only half-done.

Martins says that the company had done no advertising and no marketing. An impressive achievement.

Cookies have been a controversial tracking method for many years and they are now being phased out. The war against cookies is hurting many companies that relied on them to sell marketing services. Arena doesn't use cookies; it uses a single-pixel based technology to generate first-party data about user behavior across multiple customer-owned websites. The data collected is not sold it is only for internal use by Arena clients.

This customer data is processed by Arena's machine learning analytics engine and fed into a client dashboard used to manage and monitor subscriptions, advertising, and key traffic metrics in real-time. Clients can apply predictive marketing analytics such as which users might become subscribers or might cancel.

Innovation can happen anywhere in the world but being in Silicon Valley is important, says Martins. The successful playbooks for building a modern business are here, companies such as Dropbox and many others. And here is where Arena finds the people that know how to execute such playbooks.

Even though word of mouth has worked well, Arena says it will be hiring sales execs as it expands into enterprise markets -- a potentially huge opportunity these days as every company has to be a media company to an ever greater extent. There are far less independent media.

Martins sees great potential in the enterprise market as every company realizes it will need the same tools as media companies use.

This "every company is a media company" is a trend I've been writing about since it first started emerging in 2005. It's behind the content marketing trend, which is taking over the PR industry. EC = MC is a transformative equation.

Martins says that the company still has nearly 60% of the $1 million raised in its first seed round. He says the best time to raise money is when you don't need it -- a point that Gianforte would totally agree with -- yet many founders still miss the point of bootstrapping.

Bootstrapping means you might need to sleep on someone's couch for a while and develop a taste for instant ramen noodles, but this temporary inconvenience builds equity value and ultimately helps you maintain control of your business.

Bootstrapping is an incredibly powerful strategy that seems forgotten by many founders who see obstacles if they can't raise VC interest. Arena reminds us that startups can succeed with and without VC money.

When it comes to headlines -- Silicon Valley startups should not be praised on the amount they raise but on how much equity they keep.

Join Discussion for: Arena and the disappearing art of bootstrapping...