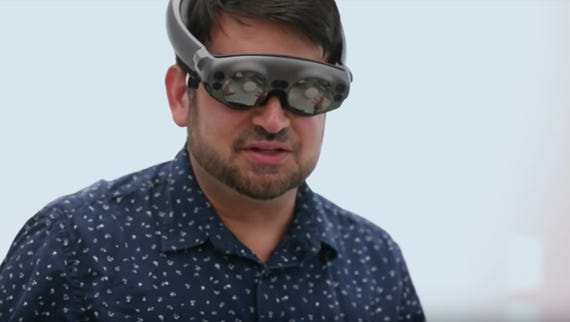 After years of acquiring and investing in TV distribution, content, and new client technologies, AT&T is ready to show the world how all of its vastly expanded corporate assets come together. To do this, it recently launched Game of Thrones-themed "takeovers" (although "invasions" seems more thematically appropriate) of several of its flagship stores. Artifacts from the immensely popular HBO spectacle entering its final season include costumes and props from the series, including a replica of the series' iconic chair primed for photo opportunities.

But the most interesting attractions from a technology perspective are a VR experience featuring an HTC Vive headset and an augmented reality experience featuring the Magic Leap One. The latter is the first consumer product from Magic Leap, in which AT&T is a major investor. When I tried both experiences earlier this month, they offered an excellent opportunity to evaluate the state of the art of VR versus AR and their suitability for entertainment experience, a technological game of thrones.

Also: Bad start for CNN app on Magic Leap One

Starting with VR, It's worth noting that AT&T has "cheated" a bit in its Game of Thrones VR experience. To create a more convincing illusion of life within Westeros, the VR experience includes a fan that blows cold air at the wearer and a vibrating floor that responds to dramatic points in the experience. These both add tremendously to the VR simulation and would be beyond the means of a typical VR gamer.

They could be deployed in an AR experience as well, but the VR experience reflects the technology's advantages and maturity in other ways. While both simulations include fighting with weapons, the VR experience simply does a far better job of driving an emotional reaction because of its isolation. In contrast, despite AT&T enhancing the AR demo area of the second floor of its San Francisco flagship store with Westerosian scenery and even some animatronics, the Magic Leap experience doesn;t pack nearly the same emotional punch.

There are more reasons why it isn't exactly a fair fight between the two technologies. Even bereft of the sensory augmentation, the HTC Vive gets to call upon a powerful desktop PC to generate its visuals. In contrast, the Magic Leap One must rely on a puck worn at one's side powered by an SoC with tighter thermal constraints. The VR experience also takes more time and results in an unpleasant ending for the wearer's character, which could have also contributed to the greater emotional reaction. Calibration difficulties encountered while trying the Magic Leap One led to my hearing the simulation's introduction four times, which also likely reduced some of its impact.

Removed from the souped-up VR comparison, however, the Magic Leap One experience impressed. The Game of Thrones scenario reminded me somewhat of one of the first-gen HoloLens games -- but with a field of view closer to that of the second-gen HoloLens. And while the emotional reaction was not as intense, it was palpable. The otherwise sterile second floor of a wireless store might not impart much of a personal connection, but I could see how a similarly structured game could tap into the impact of a familiar environment such as one's home. For $2,295, optionally payable in monthly installments, you can try it in yours.

The HoloLens 2 ($3,500 to preorder) may represent the best overall AR experience for now, but with Microsoft shifting away from entertainment as a HoloLens 2 focus, the Magic Leap One can lay claim to being the best consumer AR experience. In its early days as an entertainment platform, it can't yet hold a candle to the depth and richness of VR's state of the art, at least not in the face of the fierce winds of Westeros.

Wayfair bets that Magic Leap One can enhance shopping
The Magic Leap One has arrived for developers and at least one enterprise thinks it has some business potential.

Best VR headsets for 2019
Start here to see our favorite headsets to use on their own, with your phone or connected to a PC.

Magic Leap's Seedling showed me the challenges of AR gardening
Living with virtual plants in the real world is a game of subtleties.