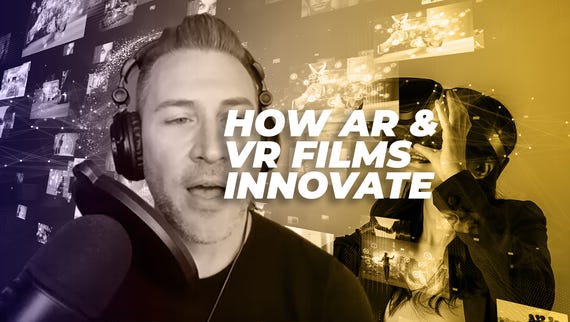 How AR and VR films continue to innovate
Watch Now

As it approached release following its 2012 Kickstarter campaign. the Oculus Rift presented a virtual reality experience of unprecedented quality for a consumer product. Since then, Oculus and a host of competitors have made refinements in cost, quality and convenience. Also in that time, though, AR and mixed reality have begun to offer the promise of working with digital objects without having to remove the context of immediate surroundings.

While both VR and AR tech suppliers readily acknowledge that the technologies will merge in the future, few major companies have a strong presence in both today. Google has its Daydream platform and provides ARCore tech for Android smartphones. But a better example is Microsoft, which has its HoloLens headset but also provides a platform via Windows for virtual reality headsets (which it also refers to, somewhat confusingly, as mixed reality). Both AR and VR have flirted with mainstream applications, particularly in games. The most popular VR headset, for example, is Sony's PlayStation VR headset. Pokemon Go, launched on smartphones, became the first AR megahit. But the strongest case for both technologies has been in various vertical applications, including some overlapping tasks such as design and training.

Following several years in which AR has stolen much of VR's thunder, a new wave of VR headsets are addressing one of the biggest issues surrounding the use of VR for precision work, greater resolution. A few weeks ago, Finnish startup Varjo announced the shipment of what it claims is the first VR headset to deliver resolution equivalent to human vision. Varjo had initially planned to deliver this by dynamically maximizing the resolution of the area of the display at which the eye was looking dynamically. Instead, though, the company has opted for a more traditional field of view that operates at utra-high resolution while the periphery of the display is more akin to an Oculus or Vive experience.

Even with this compromise, the high-resolution area of the display is generous enough to demand about the most powerful PC one can throw at the rendering. That only adds to the Varjo's price tag, which comes in a tad under $6,000, not including a mandatory first-year support cost of $1,000.

Some of Varjo's earliest applications, such as designing jet cockpit simulations and luxury car design require the highest degree of precision and fidelity. But those that can sacrifice a bit of resolution for more modest hardware requirements and a far lower price from a more familiar brand may be more interested in HP's new Reverb headset. The Reverb is HP's second headset that uses the Windows Mixed Reality platform, However, it doubles the resolution of the company's first effort to 2160 x 2160 pixels in each eye with a 114-degree field of view. In a demo, it produced a sharper image than the recently released Samsung Odyssey VR headset although that sells for less than half the price of the Reverb.

As a natural companion product for HP, the Reverb demands more processing power than its predecessor as well, although it can effectively run from a high-end laptop such as HP's Omen computers or one of the VR backpacks HP also offers. The backpacks are often used in public settings such as VR arcades, although that's a model that's proven challenging.

While Varjo shows that high-quality commercial VR can reach expense levels well beyond that of HoloLens hardware, the two technologies are still used in different ways. Take training, for example. VR applications are useful for simulating tasks or procedures that a worker may have to do in the future. Because the entire environment is simulated, they can get a preview of what conditions may be like without having to journey to the actual site where the work is taking place.

AR, on the other hand, is better for realtime education because it makes it possible to work with physical objects while keeping one's hands free (if using an AR headset like the HoloLens). One AR obstacle is the lack of affordable headsets that offer at least a solid if not outstanding AR experience, an equivalent to, say, the Oculus Go. As I mentioned in my first column about the HoloLens 2, that can be addressed somewhat by using smartphones and iPads, but that creates a big gap with the HoloLens experience. At the high-end, Varjo expects to offer an add-on kit to its professional headset that adapts it for mixed reality, but there doesn't seem to be a clear path for more mainstream players to bridge AR and VR just yet.

The best VR display I've ever seen costs only $6,000
Varjo VR-1 melts away pixels and gets to retina resolution -- with eye tracking and a mixed-reality add-on coming this year.

HP Reverb gives Microsoft VR a high-res boost
The new $600 VR headset doubles up on the Samsung Odyssey and Vive Pro, arriving late April. We gave it a test drive.