AT&T's 3G Service Crisis: Will iPad Make it Even worse?

I've been living with a Droid handset for a couple of months courtesy of Verizon Wireless and have been comparing it to my iPhone 3Gs. I'm wondering (dreading) what is going to happen to AT&T's US wireless service when the 3G iPads hit the market: service in major metropolitan areas is pretty appalling and now there is going to be another wave of 3G devices relying on an inadequate network.
Written by Oliver Marks, Contributor on March 21, 2010 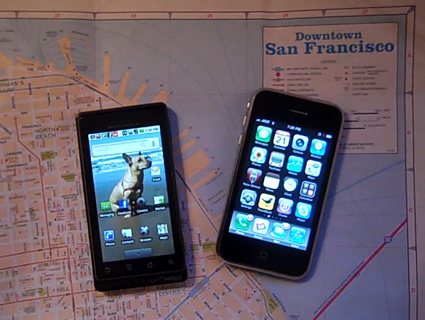 I've been living with a Droid handset for a couple of months courtesy of Verizon Wireless and have been comparing it to my iPhone 3Gs. I'm wondering (dreading) what is going to happen to AT&T's US wireless service when the 3G iPads hit the market: service in major metropolitan areas is pretty appalling and now there is going to be another wave of 3G devices relying on an inadequate network.

The Droid is a solid little handset but for me suffers from a split personality between its touch screen and the slide out keyboard and controls. While I have enjoyed using and testing a wide range of applications on it - Facebook, email, train schedules, youtube, maps etc - the iPhone user experience on the iPhone is far more intuitive and easier to live with and control in my opinion.

The Droid's keyboard is just too small for me to be able to write effectively on it and I was making a lot of mistakes while trying to log into applications for the first time on it.  I have pretty thin fingers but found I was having to fingernail type. 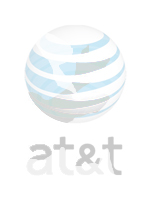 Here's the thing though: it works as a phone and a 3G device. Verizon's service was rock solid the whole time I used it and I never had any problems with voice or data service.

Given that I didn't give out the Droid phone number to many people I didn't receive many calls on it. The Droid came to the rescue twice when I tried to dial into conference call numbers with my speakeasy.net voip landline only to get the 'all lines busy' signal that denotes a freeconferencecall.com refusal in San Francisco. (See my previous post 'Why 'Free Conference Calls' are like Russian Roulette')

Dialing in on the Droid was the easy solution and voice service was excellent. My first generation iPhone and now my iPhone 3Gs are useless in my home office, and it's basically a crap shoot when and where they will work.

Given the already poor service in iPhone heavy use areas like San Francisco and Silicon Valley, the thought of yet more users trying to use the obviously overloaded system when the iPad 3G launches doesn't bear thinking about.

After my last post commenting on the deteriorating quality of AT&T service with my Edge powered first gen iPhone I finally found a local AT&T business office that showed me an online map that put my home in an 'excellent' 3G area. Given I had a $500+ dollar balance on my 'goPhone' pay as you go account because I wasn't making any voice calls because the phone part of my phone didn't work(!) I put that money towards the 3Gs handset you see above.

The slide below is from the AT&T January earnings call and shows 3G Voice Composite Quality in  San Francisco and New York City were below the company's 'performance objective' but supposedly improving if you're to believe the graphs. 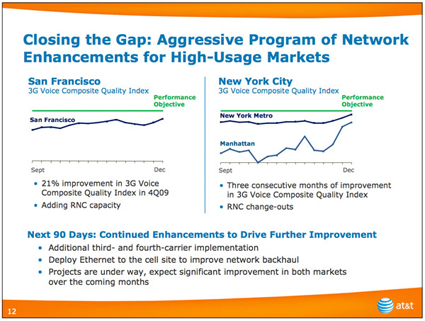 These two business oriented cities, where networking and business communication and collaboration are paramount, should be a showcase for AT&T's voice service...but regardless of how many little signal strength bars you see on your phone service in both cities is either exceedingly patchy or non existent.

Once Apple roll out the 3G iPad - which shows every sign of being as ground breaking as the iPhone was - business users locked into two year contracts may well see another huge hit on service quality despite AT&T investing in new infrastructure.

I'm going to 'jailbreak' my first gen iphone this week and put the sim from my old Verizon Motorola Razr V3 in it to compare voice signal quality and make sure it's AT&T and not the iPhone that is the problem. The sad part of this is I'll be carrying the fastest iphone - the 3Gs - in my pocket with 19 months left on a two year contract, and an old Verizon handset or jail broken first gen iphone to actually make and receive calls.

Right now I'm wishing I'd got a ipod touch instead of the 3Gs, and ironically the iPad appears to be the super sized version of that. What a wasted opportunity by Apple and AT&T!

For companies at the apex of the global technology industry this is an extraordinary way to do business. It's fortunate that no one has matched the iPhone user experience and ease of use yet but it's only a matter of time...