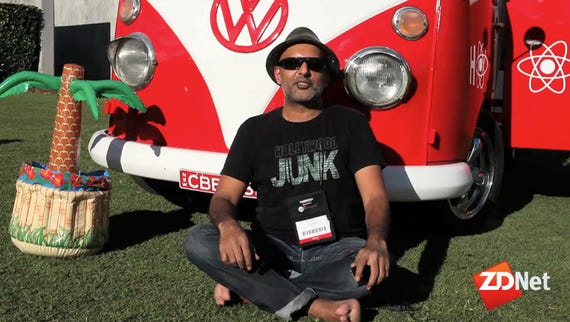 Once again, the biggest event on Australia's cybersecurity calendar is winding down.

Having covered this event so many times in the past, this year I wanted to give viewers a new angle, so I brought up Parrot Drone with the hopes of buzzing Graham Ingram during his welcoming address and also getting a bird's eye view of events.

Everything was looking good on Tuesday. A test flight in the hotel room went well, as did a stealth flyby through the HackLabs tent. I even managed to land it on Gatford's shiny red kombi van.

But then something went wrong.

Had it been hacked? Did it become self-aware? Was it confused by all the wi-fi signals?

Whatever the reason, it disconnected from my iPad, ignored my frantic shouting and waving, and hovered above the Tripwire and Bellridge stands. Just out of my reach.

After minutes of intense battle, the war was finally won.

I hope AusCERT 2013 has been as educational and fun for you as it has been for me.