A group of Australian students have just been crowned winners of the Imagine Cup, a global competition in software design.
Written by Brett Winterford on July 8, 2008 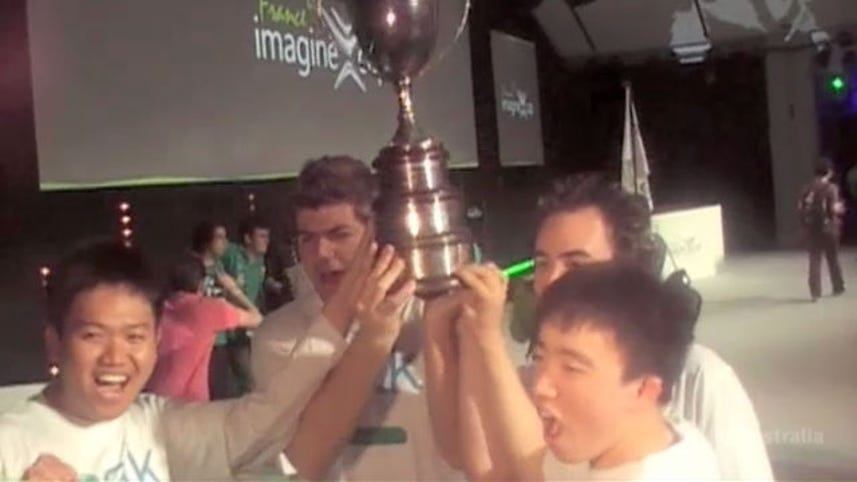 A group of Australian students have just been crowned winners of the Imagine Cup, a global competition in software design.

The Microsoft-sponsored competition attracted entries from 200,000 students around the world — 370 of which travelled to Paris for a final week of presentations and competition.

The Australian representatives, Team SOAK, won the most coveted prize of the competition with a software solution that helps farmers automate and regulate the use of water on their properties.

David Burela of the University of Tasmania, technology blogger and Monash University student Long Zheng, Melbourne University's Edward Hooper and Swinburne University's Dimaz Pramudya, came up with the SOAK solution in response to the 10-year drought that has plagued the Australian rural sector.

Aside from their US$15,000 cash prize, Team SOAK was also chosen by the judges as winners of a BT (British Telecom) sponsored "Accelerator" award — which will see the students coached by industry experts on how to commercialise their solution, and pitch it to venture capitalists in Silicon Valley.

The competition
The students were asked to build a complete software solution using Microsoft tools under the theme "imagine a world where technology enables a sustainable environment".

Team SOAK's solution automates the various manual systems farmers use to coordinate the pumps, drippers and sprinklers that water their crops. It tightly controls the irrigation on a given property using a Zigbee-powered sensor network to detect such variables as temperature, dam levels, soil moisture and salinity or wind speed.

These sensors connect to a software system that is also fed by internet weather forecasts and other external data sources relating to the property's water health. The system can, for example, hold off on watering an area should rain be forecast the following day, but kick back in should rain not eventuate.

The solution is built on industry-standard hardware and Microsoft software, using sensors that the team estimates could cost as little as AU$100. Current sensor networks, the students said, cost tens to hundreds of thousands of dollars.

The solution has been tested and showered with praise by the Morning Star Estate Winery in Victoria, and has also been lauded by both the Victorian Farmers Federation and The National Party.

The students also claim to be in discussion with hardware manufacturer Hewlett-Packard about the potential for selling the solution as a complete hardware and software package.

Celebrations ahead
The students, who have spent the last five months developing the solution and the last week in intense competition, were ecstatic in taking out the prize.

Tonight they finally get a chance to let their hair down and enjoy the sights of Paris. Tomorrow, said Hooper, "we're going to Disneyland".