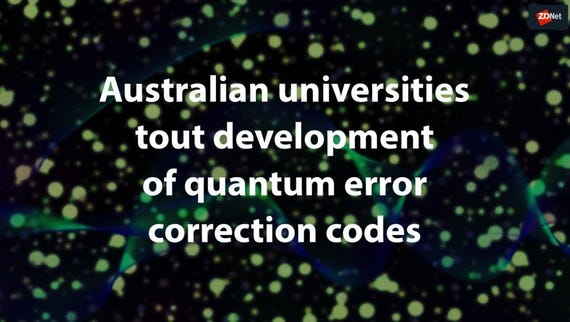 Scientists from the University of Sydney (USyd), the University of Queensland, and the Royal Melbourne Institute of Technology (RMIT) have published research on the development of quantum error correction codes, which is expected to reduce the number of physical quantum switches, or bits (qubits), required to scale up quantum machines to a useful size.

The new approach takes advantage of the infinite geometric space of a particular quantum system made up of bosons, USyd said.

"The beauty of these codes is they are 'platform agnostic' and can be developed to work with a wide range of quantum hardware systems," said USyd's Dr Arne Grimsmo, who led the researchers.

"Many different types of bosonic error correction codes have been demonstrated experimentally, such as 'cat codes' and 'binomial codes'.

"What we have done in our paper is unify these and other codes into a common framework."

To build a quantum machine that can do anything useful would require thousands, or potentially millions, of qubits operating without being overwhelmed with errors. This is a difficult proposition, given qubits are very error-prone.

"The 'quantumness' that allows them to perform a completely different type of computing operation means they are highly fragile and susceptible to electromagnetic and other interference," USyd explained, adding that identifying, removing, and reducing errors in quantum computation is one of the central tasks faced by physicists working in this field.

Grimsmo said one of the most fundamental challenges for realising quantum computers is the fragile nature of quantum superpositions.

"Fortunately, it is possible to overcome this issue using quantum error correction," he said.

This is done by encoding information redundantly, allowing the correction of errors as they happen during a quantum computation. Grimsmo said the standard approach to achieving this is to use a large number of distinguishable particles as information carriers.

Grimsmo said in this work, the researchers considered an alternative approach based on encoding quantum information in collections of bosons.

By trapping bosons in a particular microwave or optical cavity, they become indistinguishable from one another.

"The advantage of this approach is that large numbers of bosons can be trapped in a single quantum system such as photons trapped in a high-quality optical or microwave cavity," Grimsmo said. "This could drastically reduce the number of physical systems required to build a quantum computer."

The research was published in Physical Review X, jointly written by Dr Joshua Combes from the University of Queensland and Dr Ben Baragiola from RMIT.

The researchers hope their foundational work will help build a roadmap towards fault tolerance in quantum computing.

Meanwhile, researchers from the University of New South Wales (UNSW) have announced a "happy accident" in the laboratory that it claims has led to a breakthrough discovery that not only solves a 58-year old puzzle, but also has major implications for the development of quantum computers and sensors.

"This discovery means that we now have a pathway to build quantum computers using single-atom spins without the need for any oscillating magnetic field for their operation," UNSW Scientia Professor of Quantum Engineering Andrea Morello said.

"Moreover, we can use these nuclei as exquisitely precise sensors of electric and magnetic fields, or to answer fundamental questions in quantum science."

According to Morello, the discovery shakes up the paradigm of nuclear magnetic resonance, which is a widely used technique in fields such as medicine, chemistry, or mining.

The researchers were attempting to perform nuclear magnetic resonance on a single atom of antimony, with the original goal to explore the boundary between the quantum world and the classical world.

"This was purely a curiosity-driven project, with no application in mind," Dr Serwan Asaad from UNSW said.

"However, once we started the experiment, we realised that something was wrong. The nucleus behaved very strangely, refusing to respond at certain frequencies, but showing a strong response at others," added Dr Vincent Mourik.

"This puzzled us for a while, until we had a 'eureka moment' and realised that we were doing electric resonance instead of magnetic resonance."