The universities have announced that its engineers have demonstrated the theoretical work of physicists.
Written by Asha Barbaschow on April 17, 2019 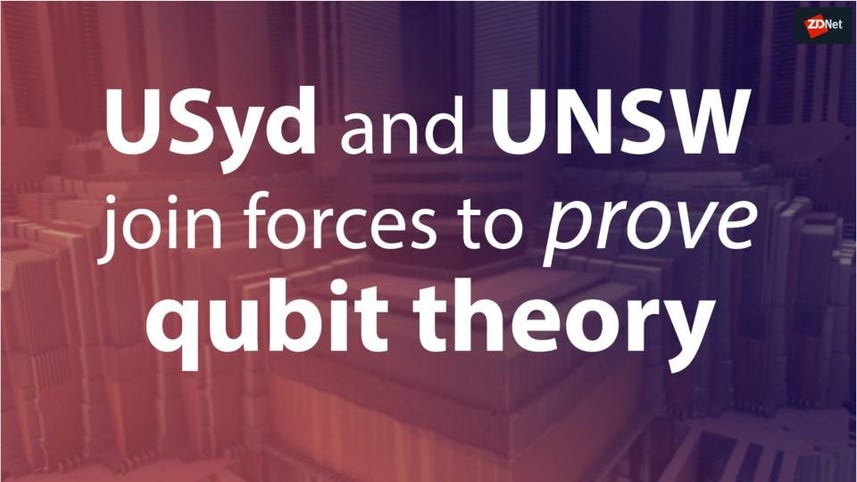 Calling it a "world-record result", USyd said the experimental result saw the reduction of errors in semiconductor "spin qubits" -- quantum bits -- which are a type of building block for quantum computers. A spin qubit is a quantum bit that encodes information based on the quantised magnetic direction of a quantum object, such as an electron.

The experiment demonstrated error rates as low as 0.043%, which the pair of universities said was lower than any other spin qubit.

The result was achieved using the theoretical work of quantum physicists at USyd's Nano Institute and School of Physics and performed by UNSW engineers. It is the first announcement from the pair of universities since they joined forces in March to help Australia be the first to cross the quantum finish line.

In announcing the Quantum Harbour City partnership, the universities said they had already demonstrated that the state, or value, of a qubit in silicon could be read out in a way that removed the need to have readout sensors alongside the qubits.

Qubits need to be built in complex arrays before a functioning quantum computer can be developed, but the issue however, lies with how best to design the systems.

"By removing the need for parallel readout sensors, the joint result allows for a computing architecture that is much simpler, meaning many more qubits can be built alongside each other," the pair of universities said last month.

Australia is emerging as a global leader in quantum technology, with the nation investing heavily into its capabilities.

The New South Wales government in February announced the funding of a new initiative aimed at getting more people engaged with quantum computing.

The AU$15.4 million Sydney Quantum Academy (SQA) initiative will see USyd, UNSW, Macquarie University, and University of Technology Sydney (UTS) encourage students to work with each other and train across the four universities.

The NSW government funding, combined with current university and future industry support, sees the total investment in the SQA pinned at around AU$35 million.