Double blind trials have debunked any health concerns about 5G and radiation, ARPANSA has said.
Written by Aimee Chanthadavong, Senior Journalist on Dec. 5, 2019 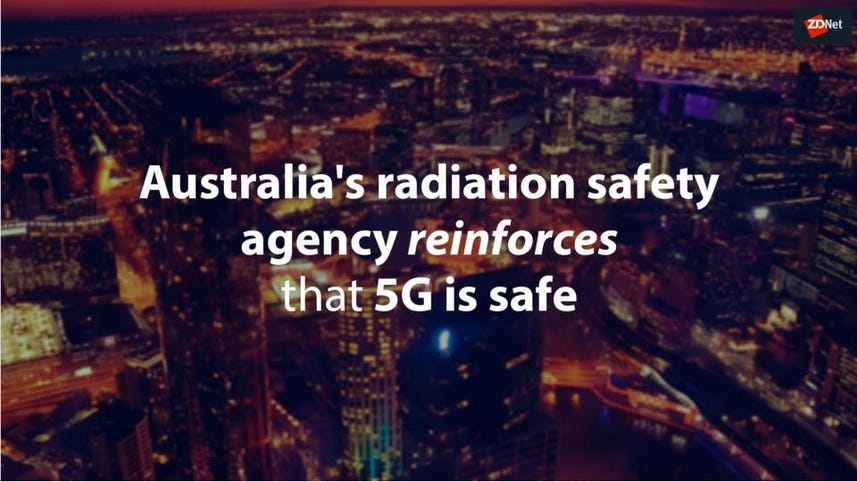 The Australian Radiation Protection and Nuclear Safety Agency (ARPANSA) has reiterated that there is no evidence that indicates 5G is harmful to people's health.

"Our assessment of 5G is that it is safe," Nathan Wahl, ARPANSA government international relations assistant director, told the Standing Committee on Communications and the Arts on Friday.

As part of the inquiry into the deployment, adoption, and application of 5G in Australia, ARPANSA lead scientist Ken Karipidis explained how through double blind trials, the organisation was able to disprove individuals who claimed exposure to electromagnetic hypersensitivity (EHS) was causing them to feel side effects, such as a burning sensation.

"What we mean by double blind is we've exposed those individuals to electromagnetic fields in a double blind scenario. In other words, the person doesn't know when the exposure is on or off and neither does the researcher.

"And in all of those trials, the individual hasn't been able to discern when the exposure has been on or off, even though they might report when they walk into a room and can feel the Wi-Fi is on and that's giving them a range of symptoms."

This is consistent with the argument ARPANSA made in its submission, where it pointed out that any biological effects on humans are "physiological responses that can occur for a broad range of reasons" and are not classed as health effects which require medical treatment.

"While ARPANSA and the [World Health Organisation] recognise that the symptoms of EHS [electromagnetic hypersensitivity] are real and can have a disabling effect for the affected individual, EHS has no clear diagnostic criteria and the science so far has not provided evidence that RF exposure is the cause," it said.

"The majority of scientific studies published to date have found that under controlled laboratory conditions, EHS individuals cannot detect the presence of RF sources any more accurately than non-EHS individuals. Several studies have indicated a nocebo effect i.e. an adverse effect due to the belief that something is harmful."

The Australian Communications and Media Authority (ACMA) said people's concerns about the impact 5G would have on their health is not unique to Australia.

"We talk to our international counterparts, so other regulators around the world, and it is a general challenge we're all facing, particularly around the health concerns around EME (electromagnetic energy). Australia is not unique there," the ACMA stated, while speaking to the committee on Friday.

"We're talking to other regulators around the world on what tips they have for us around best practice, lesson learned. It's a challenge that we're all finding."

When it came to the Department of Communications and Arts' turn to testify to the committee, it said it was helping to demystify any misinformation about 5G health concerns through updating its website with "plain English FAQs" and creating a YouTube video that provides further explanation.

The government agency was also questioned about whether it sees any opportunities for local manufacturers to join the likes of Ericsson and Nokia in manufacturing 5G mobile equipment.

It said that while it would not be impossible for local manufacturers to attempt to compete with large scale manufacturers, the flipside was that it could play in the software and services layer of 5G, which it said is all the "clever value-adding stuff".

"I don't want to speculate about where new bits of manufacturing in Australia will be, but I suspect one of the areas Australian firms might look to play in is in the software and services space in running these networks, rather than manufacturing the boxes themselves," the department said.