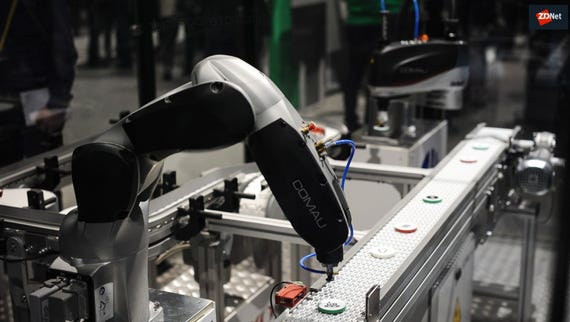 What do you do if your business requires a flexible workforce to meet seasonal demand but there are few workers available in a tight labor market?

If you're a prospective employee, you would hope the answer would be raise wages to stay competitive.

Indeed, that's traditionally been the response from employers when a surging economy brings prosperity and creates demand for workers. That engine has helped wages rise ahead of inflation during the good years.

But for those on the lowest rung of the employment ladder, the engine is showing signs of seizing.

I caught wind of a good example of this the other day.

GEODIS (LINK), a third-party logistics supplier with a 139,000 square foot warehouse in Indianapolis, was having trouble finding employees.

That's no huge surprise in a labor market that's hovered between 3 and 4 percent unemployment recently.

Instead of reflexively raising wages, GEODIS, along with a customer identified to me only as "a major online women's apparel client," partnered with Locus Robotics, maker of autonomous mobile robots for the logistics industry, which I've covered here before.

In a pilot aimed at addressing the labor crunch, the warehouse incorporated 30 autonomous mobile robots to aid in the manual picking of over 30,000 SKUs.

That such a pilot is possible is a testament to a radical shift in how automation works nowadays. Previously, installation of industrial robots would require completely reconfiguring a factory or warehouse, causing weeks or months of down time.

But the new breed of robots for both manufacturing and materials handling come out of the box capable of navigating structured environments and more or less ready for marching orders.

GEODIS's plan wasn't to replace human capacity with robots outright, but instead to figure out how to do more with the humans on hand.

Employees were instructed how to pick SKUs and hand them off to the robots on the warehouse floor, whence they'd be autonomously shuttled to stations further down the chain.

In real terms, that means the same job could be done with half the manpower.

The built-in training modules on the Locus platform also brought about a 50 percent reduction in training time, a huge consideration in an industry with high turnover.

The result is that GEODIS is now able to do a lot more with fewer workers, an option that wasn't available in the third-party logistics industry even a couple years ago. That means there's less incentive to hire, despite the surging economy and tight labor market, and no pressure to increase wages.

That's exactly the opposite result we've long grown accustomed to expecting during prosperous times. Instead of demand for workers driving wages, GEODIS is among the many companies now diverting capital to long term automation solutions.

The writing seems to be on the wall. Wages for low-skill jobs in fulfillment centers, factories, and even fast food are not going to keep pace with growth elsewhere in the economy.

What the broader consequences will be for global economic health remain a matter of intense debate. The one thing that's clear is that the paradigm for low wage workers is changing very quickly.