First-ever federal exemption may pave way for robotaxis and other driverless service vehicles.
Written by Greg Nichols, Contributor on Feb. 7, 2020 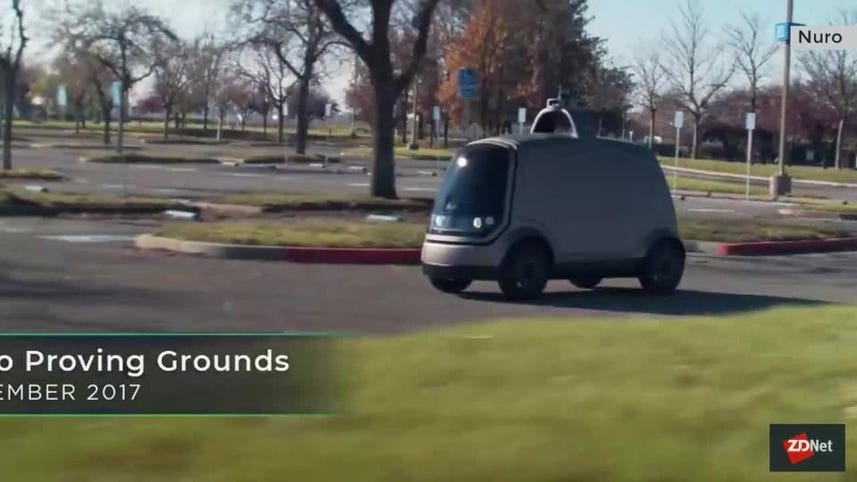 An autonomous vehicle company has been granted a first-of-its-kind federal exemption for a truly driverless vehicle from the Department of Transportation's National Highway Traffic Safety Administration (NHTSA). The exemption will allow Nuro, based in Silicon Valley, to deploy its low-speed, occupantless electric delivery vehicle, which is designed to have no human occupant.

Founded by former Google engineers Jiajun Zhu and Dave Ferguson, Nuro is gearing up to launch a fleet of small, self-driving delivery vans for last-mile urban delivery. According to the company, its pint-sized, battery-powered vans are safer than human-piloted vehicles and will relieve congestion and pollution by taking bigger delivery trucks off crowded city streets.

The temporary exemption specifically pertains to certain requirements vehicles must meet in order to operate on federal roadways.

"Since this is a low-speed self-driving delivery vehicle, certain features that the Department traditionally required – such as mirrors and windshield for vehicles carrying drivers – no longer make sense," explains U.S. Secretary of Transportation Elaine L. Chao of the decision.

In the wake of the news, Nuro will be permitted to produce and deploy up to 5,000 of its second generation vehicles, dubbed the R2, during the two-year exemption period. Regulators will closely monitor operations, the results of which will undoubtedly have a major impact on the autonomous vehicle landscape going forward. Nuro's business model is based around a B2B service. The R2 vehicles will provide a local delivery service for restaurants, grocery stores, and other businesses.

"NHTSA is dedicated to facilitating the safe testing and deployment of advanced vehicle technologies, including innovative vehicle designs, which hold great promise for future safety improvements. As always, we will not hesitate to use defect authority to protect public safety as necessary," says NHTSA Acting Administrator James Owens.

The exemption will come with increased oversight for Nuro. The company will also be required to do outreach in communities where its vehicles are deployed and report on its operations.

Still, that's a small price to be first to market with an autonomous delivery vehicle for roads that doesn't require a safety driver.

Nuro has already teamed up with major grocery brands like Kroger to test last mile delivery. The company has testbeds around the country, including in Oklahoma.