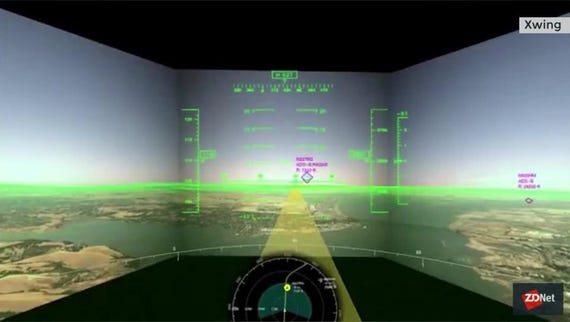 Look no hands! Pilot-less cargo flights are on the way
Watch Now

As autonomous cars roll out in testbeds around the world, it should come as no surprise that other kinds of vehicles are ditching their human operators as well. The latest innovations include airplanes, and one company's pilotless debut hints a future of pilot-less air transport.

The company, Xwing, has now performed numerous passenger-carrying autonomous take-off to landing flights in its modified Cessna 208B Grand Caravan, a first in aviation with this category of aircraft. The company has been operating in stealth as it targets regional passenger and cargo operations within a 500 mile range.

Unmanned drones have now long been a part of the aerial landscape, but drones aren't the only kind of self-driving aerial vehicle regulators have been dealing with. It may seem a foregone conclusion that self-driving cars are on the way, but we've heard less about autonomous aircraft. That's changing. Following recent crashes related to failures in autonomous systems on-board Boeing's 737MAX, you might expect consumer confidence to have eroded significantly. However, a recent ANSYS study found that wasn't the case. In fact, 70% of consumers say they are ready to fly in autonomous aircraft in their lifetime.

More recently, several companies have debuted air taxis, which promise to whisk passengers above traffic en route to their destination.

Xwing is targeting the regional air travel market. The company has obtained a Part 135 Air Carrier certificate from the FAA and will look to start commercial cargo flight operations using its own fleet in the coming months.

The case for autonomous air travel is actually pretty strong. The industry is dealing with a 30% reduction in qualified pilots over the last 30 years, according to the FAA. The boom in logistics and fulfillment, and especially next-day delivery, has added tremendous burdens to the air shipping ecosystem.

Xwing's Autoflight System addresses the problem by retrofiting existing aircraft into what it calls "optionally piloted vehicles." Remote operators who work with air traffic controllers to ensure safety throughout the flight monitor operations from the ground, centralizing human resources. According to the company, that yields 20-30 percent cost savings.

"The future of air transportation is autonomous," said Marc Piette, CEO and founder of Xwing. "We believe the path to full autonomy begins with the air cargo market, and involves remote operators supervising fleets of unmanned aircraft."

Xwing has been working with the FAA to obtain certification for unmanned 9,000lb Cessna 208B Grand Caravan aircraft with cargo capacity of over 4,000lbs, a type of plane used frequently for regional cargo and humanitarian missions throughout the world.

Join Discussion for: Autonomous plane takes off with passengers,...