Bad Blood, book review: The rise and fall of Theranos

First they think you're crazy, then they fight you...and then they prosecute you for fraud because you were lying when you said you could change the world.

To be young, gifted, and blonde rarely hurt anyone trying to make their way through the world, and Elizabeth Holmes was no exception. By now, the basics of her story are fairly well-known: she dropped out of Stanford at 19 with a plan to revolutionise medical blood testing. The idea behind Theranos was transformative. Instead of drawing blood from people's veins, develop methods for testing on the much smaller volume produced by a finger prick. Less fear, less pain, and less medical knowledge needed. People would be able to do their own blood tests in their homes and have the results uploaded to their doctor for interpretation.

The fatal flaw in this plan was that medical testing isn't like software, where it's routine to handwave over the bits that don't work yet -- and anyway you're not liable because, see, it's right there in the clickwrap licence that whatever happens it's not your fault. Instead, with people's lives at stake, you've got regulators and scientists, who are used to inspecting devices closely and expect peer review. These folks lack a sense of humour about fakery.

But young, gifted, and blonde makes an impression, and the collection of names that Holmes collected as investors and board members is astonishing, though weirdly eclectic. Her board included Henry Kissinger, former Secretary of State George Shultz, and a smattering of former senators and other political bigwigs. The leaders of both the drugstore chain Walgreen's, and Safeway saw in Theranos the opportunity to reinvent their businesses at a time when new directions were needed. Rupert Murdoch invested $125 million of his own money. The famed lawyer David Boies took payment in shares to represent the company in attacking critics. On YouTube you can see former president Bill Clinton's enchantment.

The collapse began in late 2015, when Wall Street Journal reporter John Carreyrou told the world that the devices did not work as advertised. Holmes, who had been giddily enjoying the awards and attention, began facing less friendly interviews. In these, she displayed all the evasiveness and aggressive refusal to answer questions of a recent Supreme Court nominee.

In Bad Blood: Secrets and Lies in a Silicon Valley Startup, Carreyrou tells the entire astounding story, based on the extensive research he did for the 30 articles his newspaper published, beginning with Holmes's personal background and ending with her settling fraud charges with the Securities and Exchange Commission. A two-time Pulitzer Prize winner working for the leading US financial newspaper carries weight that is not easily dismissed, and despite lawsuits, threats and terrified witnesses, Carreyrou has long since been proven right. Holmes has had to pay back millions for voided medical tests and lost investments, and watch her personal net worth crash from $4.5 billion to zero. Now, Holmes and her former COO, Sunny Balwani, are facing criminal indictments for fraud. They are pleading not guilty.

One interesting note on the dynamics of being a woman in business. Carreyrou unearthed a suggestion that Holmes's natural voice is much higher than the unusually deep one sported by her public persona. Some internet commenters appear to find this offensively fake. Yet a young woman with a high voice is genuinely disadvantaged in business, and if Holmes had succeeded we'd call her 'smart'. Margaret Thatcher, who famously took voice lessons to deepen her voice and give it that authoritative ability to cut through the braying House of Commons like a buzzsaw, certainly was.

The lesson here, such as it is, should not be "See? You can't trust women entrepreneurs". Instead, it should be: no matter how charismatic the leader of the business is, and no matter how good their story, you must get appropriate experts to check out their claims. Investors were dazzled by the names on Holmes's board. That was fine in the 1980s when nascent businesses were writing hobbyist software. But today software has real consequences for safety in the physical world, and Silicon Valley investors can't go on "asking forgiveness, not permission". Due diligence has to mean more than following the person-to-person chain of trust. 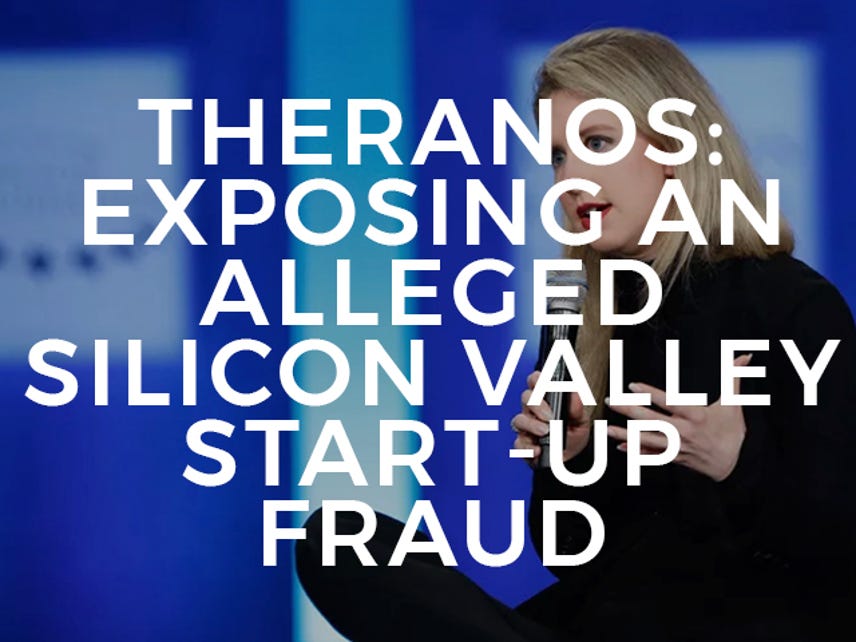 AI startup People.ai gets $30 million from Andreessen Horowitz to free up workplace drudgery
San Francisco-based cloud software startup People.ai is building data "pipelines" using machine learning that will automate much of the drudgery of updating contacts in systems such as Salesforce.com. CEO Oleg Rogynskyy tells ZDNet the result can be saving executives 20 percent to 40 percent of their busywork.

Startup boasts unhackable email protection for the rest of us
Life was simpler when it was just criminals ripping off your data. But today it is the state-sponsored hackers that pose the biggest threat to data security. Secure Channels Inc. is a startup addressing the whole data security lifecycle, including email.

The Brexit dilemma: Will London's start-ups stay or go?
The capital's tech companies are trying to plot a course that will steer them past Brexit. That will mean some difficult decisions ahead.