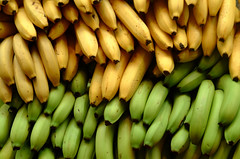 There is an apocryphal story from my old stomping ground Bristol about a man with an eye for a bargain. A supermarket with a rewards system was offering bananas with a ridiculously large number of points (though not enough to fly to America). He calculated that if he bought up all the bananas in the supermarket, he could make a tidy sum of points. And what do points mean? Exactly.

The only fly in the ointment with this plan was that he didn’t really like bananas, less so half a hundredweight. So he decided to give them away.

Well, he tried to give them away. People weren’t having it. What was wrong with the bananas? Why didn’t he want them? What was the catch?

I have come across the same problem with my micro-LUG plan for my local town. The idea is simple. I organise free workshops one afternoon a week, showing people how to learn useful computer skills using Linux & Free Software. Then the people who learn put some time back into

I have postered, flyered, built a web site, been in touch with the local press. And…

I am starting to understand. What is wrong with Free Software? Why aren’t people selling it? Why do they want to give it away? What is the catch?

There are allegedly Four I’s that prevent the adoption of Free Software: Inertia, Ignorance, Indifference & Innovation.

Perhaps I can add a fifth: Incredulity?