As much as we're told we're living in a "Wi-Fi everywhere" world, that just isn't the case. If your job or business depends on always being connected, and you're often on the road, then you need a laptop that brings wireless with you wherever you go. That's where built-in cellular capabilities come in.

Of course, you have a smartphone with that connectivity, which helps you catch up on emails and do some light work-related tasks. But if you need full PC power with you, then you're in the market for a 4G-equipped laptop. Unfortunately, while almost every notebook available today has a Wi-Fi card built in, there aren't nearly as many laptops that offer an included 4G card.

That's where this list can help. We've assembled six of the best options for laptop users who require 4G connection speeds, everything from inexpensive Chromebooks to pricey enterprise portables. In addition to built-in mobile broadband features, these notebooks place an emphasis on mobility, with lighter weights and specs that favor portability as much as performance.. 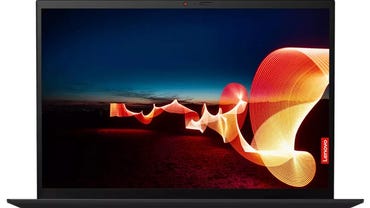 Legions of business users have remained loyal to the ThinkPad family since IBM produced it due to its superior build quality and excellent keyboard. Its X1 Carbon lineup has been widely hailed as one of the best ultraportables available, and its latest Gen 9 shows no signs of slacking.

In addition to 4G connectivity, the X1 Carbon delivers superior battery life and a tough chassis made from magnesium alloy and -- of course -- carbon fiber that survived a dozen MIL-STD 810G standard durability tests. For the base model's price, the RAM and storage are a bit meager, but this is nit-picking on an otherwise solid system. 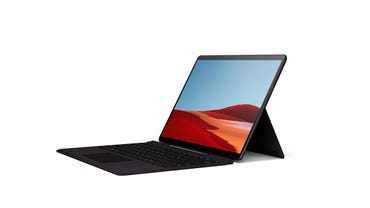 The first of two Surface devices on this list, the Pro X is more powerful and pricier than the Surface Go 2. It boasts a larger screen and an additional half-pound of heft, though it's still tipping the scales well under two pounds. The Pro X also makes use of Microsoft's SQ processor, a customized 64-bit ARM processor developed with Qualcomm.

Unfortunately, the cheapest configuration that includes LTE connectivity runs $1,500. For the price, however, you do get 16GB of RAM and the latest SQ2 processor, even if you still have to pay extra for a type cover or digital stylus. Thanks to the ARM architecture, you get excellent battery life: up to 15 hours on a charge according to Microsoft.

If you're still on Sprint... 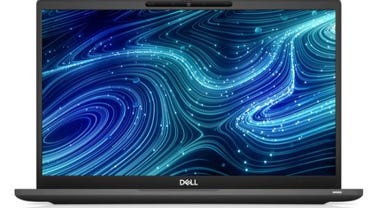 The Latitude 7320's size and specs clearly position it as a competitor to Lenovo's ThinkPad (listed below), down to the option of built-in 4G mobile broadband. Though available as both a traditional laptop and a 2-in-1 model, the base 7320 is cheaper than a clamshell notebook that doesn't rely on a pricier touchscreen display.

Either way, you get an ultraportable with a latest-generation Intel Core i5 processor and full HD 13.3-inch screen that even offers a Sprint-compatible version of its Qualcomm Snapdragon X7 4G LTE mobile broadband card. (You also get the option of using a SIM card from your carrier instead of the provided AT&T, Sprint, and Verizon options.)  Unfortunately, in our review of the convertible version of the 7320, battery life was wanting -- less than a full work day's worth -- which may help explain why Dell doesn't even list a claimed battery life for the laptop. 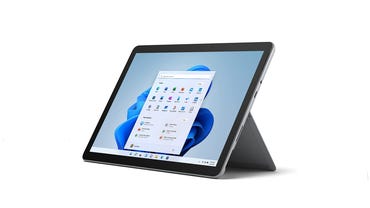 A Windows-based alternative to the Chromebooks below, the Surface Go 2 is a featherweight at a little more than a pound and priced under $1,000 with the 4G option enabled. Unfortunately, it requires an optional keyboard cover in order to make it a true 2-in-1 laptop.

On the plus side of things, our review of the device found that it offers a high-res touchscreen display (220dpi) and decent performance from its Core m3 processor. On the other hand, battery life was a bit disappointing; it didn't come close to Microsoft's claim of 10 hours during some of our testing. 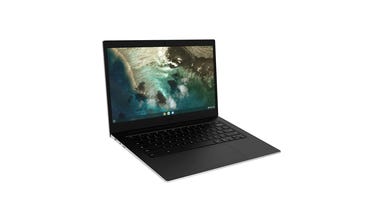 Possibly the cheapest way to obtain 4G that's built into the laptop, the Galaxy Chromebook Go, is just $250 if you purchase it with Verizon connectivity. (The AT&T configuration is out of stock at the time of this writing.) That's just $50 more than the price of the Wi-Fi version, though you still have to budget in the monthly cellular fee.

This Samsung is a basic Chromebook with nondescript specs and display. It does offer decent battery life, thanks in part to its relatively lightweight, as well as what the company claims are military-grade durability. 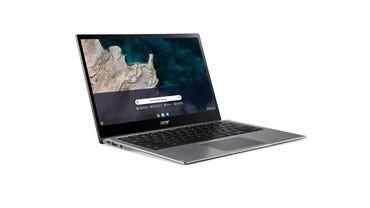 Acer's Enterprise Spin 513 is a very different Chromebook than the Galaxy Chromebook Go, even if they both include 4G capabilities. The "Spin" in its name indicates its hybrid status as a 2-in-1 device that's based around a touchscreen with greater than 1080p HD resolution, and the "Enterprise" is represented by the higher-than-usual RAM (8GB) and storage (128GB).

The Spin 513 is one of the small, but growing, number of PCs choosing Qualcomm's Snapdragon 7c compute platform instead of an AMD or Intel processor. The Snapdragon platform promises better battery life than much of the competition, and Acer's claimed battery life of 13.5 hours for the Spin 513 would bear that. The downside to Qualcomm's solution is performance; as reviewers have noted, it's only capable of basic computing tasks.

What is the best 4G laptop?

How did we choose these 4G laptops?

Frankly, there aren't a ton of 4G laptops on the market, making it easier to put our list together. Mobile workstations can include built-in cellular connectivity, but these are even more specialized (and expensive) systems than other 4G-enabled notebooks.

While laptops with mobile broadband installed used to be the domain of traditional business PCs for road warrior execs, the popularity of the Microsoft Surface lineup -- many of which can be equipped with 4G modems -- and the rise of Chromebooks have democratized the feature a bit. However it's still a niche option and one that will soon be replaced with laptops that offer the latest in mobile wireless -- 5G -- just as 4G replaced 3G-equipped notebooks a few years back.

Which 4G laptop is right for you?

Selecting a 4G laptop is like choosing any other type of notebook: Price will tend to limit or expand features as you spend less or more. Nonetheless, there are definite tiers when it comes to 4G-sporting systems, with Chromebooks occupying the low end, Microsoft Surface devices owning the midrange (and bleeding into the higher end), and traditional PC manufacturers offering cellular-equipped business laptops for $1,000 and up.

One other factor is making sure that the laptop's broadband modem is compatible with your cellular carrier. AT&T and Verizon tend to have the most partnerships with laptop makers, owing no doubt to greater enterprise emphasis than T-Mobile. Some notebooks, however, come unlocked and ready for a SIM from whichever provider you choose.

Which other 4G laptops are also worth considering?

Microsoft just released upgraded Surface devices -- such as the Surface Pro 8 and Surface Go 3 -- that will include optional cellular connectivity, but those configurations aren't expected until 2022. If you can hold off until next year, these refreshed versions will offer newer hardware than their predecessors.

You can also rely on a 4G-equipped tablet. Apple provides cellular options for its iPads, whereas it currently does not for its MacBook laptops. Cellular services also promote Samsung's Galaxy Tab lineup as an Android 4G tablet solution. In either case, adding a Bluetooth keyboard and a digital stylus to a tablet could be enough to avoid buying a 4G laptop if you don't need a traditional notebook all the time.

Finally, you can give any laptop 4G connectivity by purchasing a wireless modem that connects to your USB port. While it's an external dongle instead of a built-in modem, it offers several advantages: a fairly-low price point, the opportunity to use a wider choice of cellular providers, and the ability to move the modem from one USB-equipped device to another. However, you're relying on a third-party dongle supplier, so you won't get the level of tech support you would from a PC that includes 4G as a built-in feature.