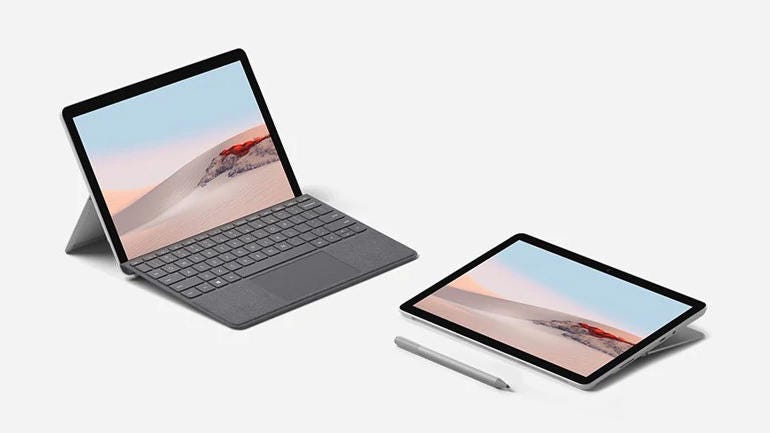 The recent updates to Microsoft's Surface range have focused more on the high-end performance offered by models such as the Surface Laptop 3 and Surface Book 3. That makes sense for people who need a powerful laptop for working from home, but it has meant that the new 10.5-inch Surface Go 2 has been somewhat overshadowed by its larger Surface siblings.

Described by Microsoft as 'an affordable and portable two-in-one device', the Surface Go 2 is really more of a straightforward tablet, with Microsoft's keyboard covers being sold separately. It's not a major upgrade either, but improvements to the screen, CPU performance and battery life ensure that it provides an attractive and lightweight device that's well suited for web browsing, email and video calls.

Like its predecessor, the Surface Go 2 is available in two versions. Home and educational users can opt for the standard version of the Surface Go 2, which runs the locked-down Windows 10 Home in S Mode, which only allows the use of Microsoft's Edge browser and apps downloaded from the Microsoft Store. But, as with the rest of the Surface range, there's also a separate model for business users, reviewed here, which is equipped with the full version of Windows 10 Pro.

The design of the Surface Go 2 hasn't changed dramatically, although its screen has grown slightly, from 10 to 10.5 inches, and now delivers a resolution of 1,920 by 1280 pixels (220dpi). The image quality is excellent, crisp and sharp, with good colour balance, and while rivals such as Apple's iPad offer higher resolution Retina displays, the Surface Go 2 works very well for simple web browsing, checking your emails or making video calls. I still don't find Windows 10 particularly well suited for use with touch-screen controls, but the Surface Go 2 responds quickly and smoothly and, of course, provides full compatibility with Microsoft Office and all your other Windows apps.

Despite the larger screen, the tablet's overall dimensions are unchanged, at 245mm wide (in landscape mode), 175mm deep, and just 8.3mm thick. There's a slight increase in weight, with our review unit weighing 544g, compared to 522g for its predecessor. But it's still easy to pick up and use with one hand, while the built-in kickstand means that you can quickly rest it on a desk or table when you need to. It's annoying, though, that much of Microsoft's marketing for the Surface Go 2 shows it being used with one of Microsoft's keyboard covers, which are not included with the tablet, and cost either £99.99 ($99.99) or £124.99 ($129.99), depending on which option you choose.

Microsoft has clearly designed the Surface Go 2 with video calls in mind, and its 5MP webcam works very well, providing clear, detailed image quality. There's also an 8MP rear camera, and Microsoft has updated the Windows Camera app to include a document-scanning mode. The twin microphones have been fine-tuned to provide greater clarity for voice calls, and even the little 2W speakers sound surprisingly robust, so the Surface Go 2 will be a good option for quickly joining video calls with, for example, Zoom or Microsoft Teams (which, of course, is bundled with the tablet). Connectivity is fairly limited, with just a single USB-C port, a Micro-SDXC card slot, and a 3.5mm headphone jack, along with Microsoft's proprietary port for its keyboard covers. But that's par for the course with compact tablets such as this, so it's unlikely to deter many users.

The Core m3 processor obviously can't match the performance offered by other models in the Surface range, but it's a good option for a tablet such as this. We were interested to note that its Geekbench 5 scores of 895 (single core), and 1650 (multi core) put it right alongside the 2018 version of Apple's MacBook Air (although we haven't yet had the opportunity to test the recent, somewhat low-profile, MacBook Air update). And, in fact, its 40fps when running Cinebench R15 actually beats the 36.5fps of the MacBook Air, so you're getting quite respectable laptop levels of performance from this slimline tablet.

Our only minor disappointment was battery life. Microsoft claims that the Surface Go 2 provides 'up to 10 hours of battery life', which seems a little optimistic. To be fair, the Surface Go 2 did last for a very respectable eight hours when playing video files stored locally on the device itself. However, switching to wi-fi streaming on the BBC iPlayer ran the battery down in just 4 hours and 35 minutes. A mobile device such as this will obviously be mostly used for wi-fi and streaming applications, so there's clearly room for improvement there.

The 10.5-inch screen size and modest battery life mean that the Surface Go 2 isn't quite the ideal two-in-one workhorse that Microsoft would like it to be -- especially because, as ever, the keyboard cover isn't included as standard. Even so, its streamlined design and solid performance ensure that it works well as a conventional tablet for web browsing, checking emails and other routine tasks. It's also well suited to online video calls, and makes a good alternative to a larger, heavier laptop when you're working from home, or just relaxing in the evening.

Microsoft Surface Book 3: A beast with staying power and a price to match