Gaming laptops used to require a big wallet -- along with a strong back to carry them around -- but they no longer have to be budget-busting behemoths. Several manufacturers have created notebooks for gamers whose price limits are set in the hundreds of dollars rather than the thousands. However, just because these are cheap gaming laptops, that doesn't mean they are total slouches when it comes to performance.

Sure, they can't match high-end rivals when it comes to the top processors, 4K displays, and latest innovations in cooling technology. Still, they will handle games that you couldn't think about playing on systems with less capable CPUs and integrated graphics -- without necessarily costing a lot more than of those mainstream portables. The half-dozen gaming laptops below will provide sufficient frames per second you'll need to play the latest games without breaking the bank. 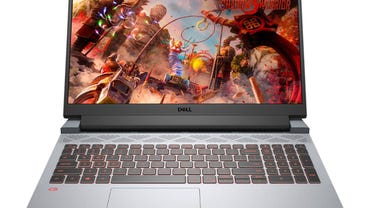 Dell purchased Alienware several years ago to get a foothold into the gaming PC market, but its systems remain pricier than what the typical Dell customer will purchase. Dell responded by introducing gaming desktops and laptops under its own brand, with starting prices under $1000. This G15 is the lowest-priced gaming laptop on the Dell online store, with many of the minimum specs that budget gaming portables include (8GB of RAM, 256GB solid-state drive, Nvidia GeForce GTX 1650 graphics card).

One key difference is in the processor, where the Dell is using a newer, faster Core i5-10500H instead of the i5-10300H that the Asus, HP and MSI rely on. You also get some Alienware DNA injected into the G15, from its thermal design to the Alienware Command Center software to optimize game settings and provide a performance boost with the Game Shift feature. Curiously, Dell does not provide any battery information beyond its size (56WHr), so draw your own conclusions about the battery life of this model. 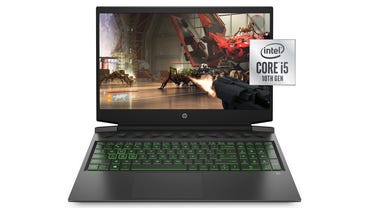 Like Dell, HP has a gaming line (Omen) that usually starts at prices above the budget gamer's threshold. Like Dell, the company has added gamer-friendly configurations to its mainstream laptop lineup to reach more cost-conscious buyers. Its lowest-priced Pavilion gaming model is configured similarly to the Dell G15, though with a few small tweaks and a cheaper price tag.

While Dell opts for a slightly faster processor, the Pavilion comes with the Core i5-10300H that the Asus and MSI laptops on this list also use. On the plus side, you get a slightly bigger screen at 16.1 inches than the typical 15.6-inch display most budget gaming laptops possess. Despite the larger screen, the Pavilion still manages to weigh several ounces less than the G15, though don't expect much in the way of battery life. 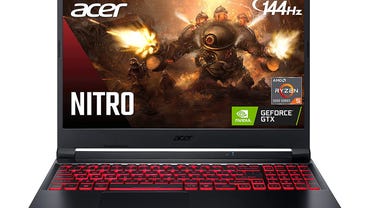 Acer has had the Nitro line of gaming laptops for years, and while it includes configurations that are well beyond budget pricing, it also has affordable options like the one listed here. While it shares many of the same specs as its sub-$1000 competitors, this Nitro 5 is equipped with an AMD Ryzen 5 processor instead of an Intel Core i5 chip.

Not only does the Ryzen 5 5600H outperform the 10th-generation Core i5 processors, but it delivers superior battery life -- at least for a gaming laptop. Unfortunately, you're paying a premium for the processor and nothing else, as the remaining specs aren't any better than its lower-priced competitors.

Ryzen 7 for the win 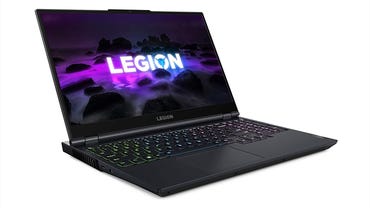 OK, so this one is $50 over your $1,000 budget. But it's still worth a look. Some gamers' idea of a budget laptop may skirt closer to $1,000 -- or even a little more. If you have a little extra cash to splurge, then the Legion 5 should be on your list to consider. For the couple of hundred extra dollars you'd spend, you get a different level of specs than cheaper rivals, starting with 16GB of RAM and 512GB of storage.

But even more important are a higher-tier processor (the Ryzen 7 compares favorably to Intel's latest Core i7 CPUs) and a graphics card that's a step-up from the GeForce GTX 1650 seen on other systems here. Besides its price, the Legion 5 is on the heavier side for this list, and your expectations on battery life should be low. 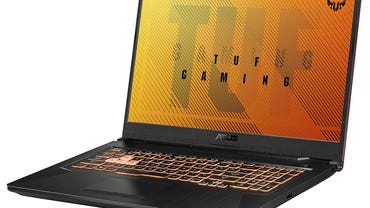 Though most laptop screens run 15.6 inches or smaller, a subset of users prefers a larger display. On this list, the HP Pavilion offers a slightly bigger screen at 16.1 inches, but for gamers who desire even more screen real estate, the Asus TUF Gaming F17 could be your choice. It provides a 17.3-inch display, which translates roughly to 20% more screen area than a 15.6-inch display possesses (although with the same resolution as the other screens here, so it's actually lower in pixels per inch).

Given the larger display, it's no surprise that the Asus is the heaviest laptop listed here, though it still manages to weigh under 6 lbs. Specs are otherwise similar to the lower-end systems here -- though you do get twice as much storage -- but you're paying more for the larger display.

Light-weight and light on the wallet 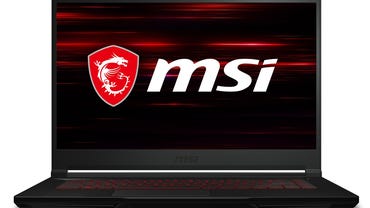 The lowest-priced laptop on this list, the GF63 Thin, doesn't cheap out on specs compared to similar models from Dell and HP. (Granted, its components are the minimum we've seen on today's gaming notebooks.) However, MSI does skimp is in form factor -- at under an inch thick and tipping the scales at just over 4 pounds, it's definitely a bit more portable than other laptops on this list.

Despite its bargain price, the GF63 does include a few gamer-friendly features like its costlier competition, such as X-shaped ventilation to cool its svelte innards and the included  MSI Dragon Center software to help customize and optimize system settings.

How did we choose these budget gaming laptops?

Obviously, price is key when it comes to budget gaming laptops, so we kept the list to models as close to or below $1000. These notebooks are from well-known brands available through major retailers like Amazon, Best Buy and Walmart, as well as their own online stores.

Also critical to making the list was the inclusion of a capable discrete graphics card, as integrated graphics really cannot handle anything beyond casual gaming. Manufacturers clearly market these laptops for gamers, so they often include touches like neon-backlit keyboards and gaming hotkeys.

Which budget gaming laptop is right for you?

Specs are usually overrated when it comes to picking a PC, but not when it comes to gaming systems. Purchasing a cheap gaming laptop is definitely a case where you have to get the most bang for the fewest bucks. It's a careful balance, though, as doubling your RAM or getting a better graphics card will impact your budget. The closer you get to the $1,000 price point, the more likely you'll be able to get more than just the basic gaming laptop specs: maybe a newer processor or 16GB of RAM or a 512GB solid-state drive. If you're watching every dollar, however, you'll have to make do with those bare minimum specs.

Two other important considerations are weight and battery life, neither of which is a gaming laptop's specialty. The notebooks on this list fall on either side of the 5-pound mark, but if you're planning to take the laptop with you on the go often, a lighter system might be of greater importance to you. You also shouldn't expect miracles when it comes to battery life, as more powerful components being pushed to the max by games will chew through a charge, though if staying unplugged as long as possible is crucial, serious consideration should be given to the Acer Nitro 5's superior battery numbers.

Which low-cost gaming laptops are also worth considering?

The flip side to the rapid advances made in computing processing and graphics is the previous generation of hardware is "outdated" -- even though most of it is plenty capable of years after. Bargain hunters who don't mind an older Intel Core CPU or Nvidia GPU might find a last-generation system at a discount, which means you can sometimes get a more powerful laptop at a similar price of a newer model.

If you are looking to spend as little as possible on a new gaming laptop, Walmart has an Evoo brand gaming laptop with similar specs to the Dell and HP models listed above (Intel Core i5 processor, Nvidia GeForce GTX 1650 graphics) for under $600. You're trusting a relatively unknown brand, however, and the higher price from the more established companies may be worth your peace of mind.