With the ever-present risk of power loss from weather disasters and other problems, and the need to keep your critical power demands running, you might be considering buying a whole-house generator or standby generator for your home. Understanding the available features and assessing your power needs will help you buy the right size emergency home generator to keep things running.

Having a standby generator ready to go will give you the security that you have the backup power that you need when an emergency hits and you lose power -- perhaps for a long time. This range of emergency, portable, whole-house generators have features like inverters that will cope with a variety of power needs, and they come in a range of sizes.

If you have a requirement to power your whole house in an emergency power outage, I have assumed that you will want to power at a minimum: A TV, fridge, desktop computer, laptop, freezer, four lights, and a 2kW electric fireplace. That adds up to a power requirement of around 3,630W.

These emergency generators like to operate at 50% of maximum load, so if you want to power more than this list, such as a microwave, washing machine, medical equipment, pumps, etc., you will need to choose a portable generator that delivers more than 6,000W to give you a larger margin of backup power.

There are several things to consider when choosing the right generator for your home and home office:

What type of generator do you want?

These are commonly found in larger generators that are needed for industrial use. Other coolants for generators could be oil or coolants such as Hydrogen. The generators in this list are all air-cooled generators and are designed for lower-power levels in domestic situations.

Large homes with myriad power needs and larger power outputs or commercial or industrial environments should consider a more expensive liquid-cooled generator that has a larger capacity. if you intend to use your generator when you are camping, you will also need to consider factors such as whether your generator is weather-proof for use in wet conditions,

How much power do you need from your generator?

You need to work out exactly the amount of power you need in wattage before you choose your generator. If you have carried out your power audit and have calculated that you need far more wattage than the generators specified below, then you should consider an industrial liquid-cooled generator.

Remember some items will be running concurrently, others only running for a short burst of time. These factors need to be taken into consideration when you carry out your power audit.

How long will you use the generator?

Air-cooled generators can not run for days on end. Each has a recommended maximum time that it can be run. Make sure you know the maximum running time for the generator and turn it off to cool down before using it again.

How noisy is your generator?

What fuel do you want to use in your generator?

Most of the generators in this list all use gasoline as fuel. If you are not going to use the generator for an extended period of time, make certain that you empty the gas tank before storing it away. If the gas is left in the tank, the volatiles in the fuel will evaporate leaving a residue in the tank that could gum up the generator the next time it is used.

This would not be a good idea in an emergency situation. Adding fresh fuel each time you use it will ensure that it will perform the best way possible. Larger commercial generators are fuelled by propane, natural gas, or diesel most diesel generators have a 24-hour tank capacity.

Two of the generators in this list are multi-fuel generators that use both gasoline and propane. Regardless of the fuel source for your generator, it is a good idea to power the generator off for a period of time to allow it to cool down.

How much maintenance does your generator require?

If you want a low maintenance generator then consider air-cooled systems. These are easier to maintain than liquid-cooled generators and you do not have to perform maintenance as often. 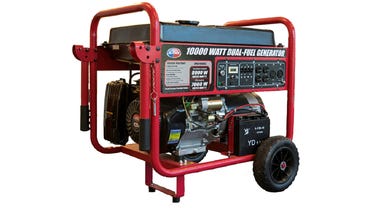 The All Power America backup generator is suitable to power medium-sized homes during a power outage. It is duel fuel-powered, running on propane or gasoline, and will deliver 9,500W peak power on gas and 7250W peak power on propane. Its peak/surge power is 12,000W, and it will run for 10 hours running at half load on one 8-gallon tank of gas. It has a handy pushbutton electric start and a recoil start. It might be a little noisy at 76dB, and although it is EPA certified, this model is not C.A.R.B. compliant, so it cannot be used in California. It weighs 237 pounds and has solid wheels. 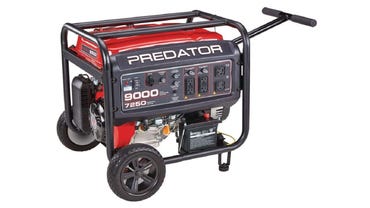 The Predator 9000W standby emergency generator will deliver 7,250W running and 9,000W surge/start-up. It has an electric start and a recoil cable in case the electric start batteries are flat. It runs on gasoline, has an 8-gallon tank, and will deliver up to 13 hours under 50% load.

It is quite noisy at 76dB -- around the same volume as a vacuum cleaner. The generator will shut down if it detects a low-oil level. It weighs 194 pounds, so its (optional purchase) wheel kit and pulling handle are useful for portability. 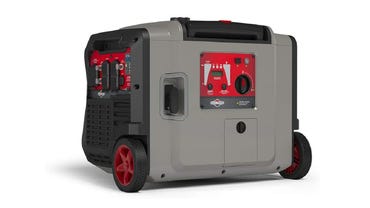 The Briggs and Stratton backup generator is a 3700W electric start generator that is lightweight at 115 pounds and portable with a pull-up handle and no-flat tires. It has 4,500W starting/surge and 3,700W running and has inverter technology. It is quiet too at 60dB. Its fuel capacity is 3.5 gallons, which can operate for up to 16 hours at 25% load. Unfortunately, this model is not EPA or C.A.R.B. compliant, and it is not possible to run two of these generators together in parallel. 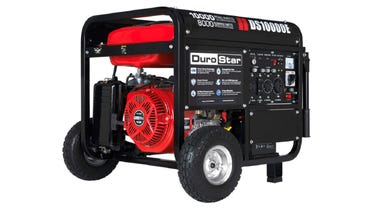 The Durostar 10,000W home backup generator with a fold-down handle and solid wheels. It has 10,000W of start-up/surge power and 8,000W of continuous power with an 8.3-gallon gasoline tank, meaning that it will run for 10 hours at 50% load and is quite quiet at 72dB. An idle control will modify the revs when the power requirements are lower. This backup generator is designed with two circuits, each supplying up to 3,900W individually. It weighs 260 pounds so is not as portable as some of the other emergency generators on this list. 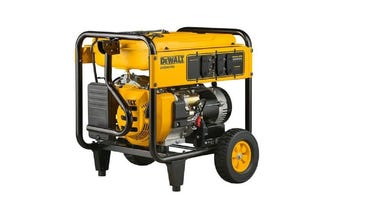 The DeWalt 7000W backup generator has solid wheels and a towing handle for portability. It has 8,750W starting/surge and 7,000W for running. It has an idle control, so it will reduce in revs when the power requirements are lower. It uses gasoline, and the tank will hold 7.5 gallons giving it a run time of 10.5 hours under 50% load. The emergency generator will shut down if the fuel level is too low -- or it detects that the oil level is too low. It has an electric start, a recoil handle, and it weighs 192 pounds. 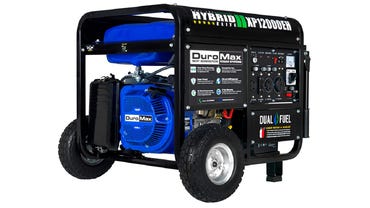 The DuroMax will happily power a medium-sized home and will run on either propane or gasoline. It has an 8.3-gallon fuel tank so will deliver up to 8 hours of power running at 50%, longer if you run it on propane. It has 12,000W starting/surge and 9,500W running. It has an electric or recoil (pull cord) start and solid wheels. It is fairly quiet at 74dB and has idle control to lower the revs when power load requirements drop. It can also double your voltage requirements to 240V if required. 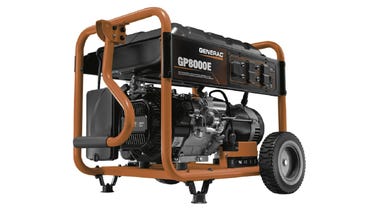 The Generac 6954 GP8000E whole home generator has an electric start for ease of use and has a meter to track the hours it has been in use so you can gauge when it next needs maintenance.  Its startup/surge capacity is 10,000W with an 8,000W running capacity. It has a 7.5-gallon tank for gasoline, so it can be used continuously for up to 9 hours under 50% load. It will shut down when it detects that the fuel is low. This generator delivers "splash lubrication." This is how old cars are lubricated. Oil is delivered where it is splashed around inside the engine -- unlike modern engines that have lubrication delivered at constant pressure. It is quiet in use at 70dB. It has a folding handle and solid wheels to avoid punctures. it weighs 197 pounds. 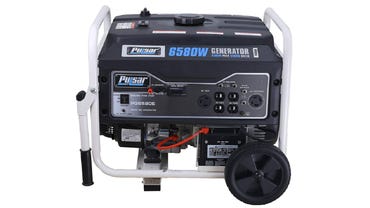 The Pulsar G6580E will easily power most items in a small-sized house in an emergency. It has a 6,580W starting and 5,500W while running. It will operate for up to 12 hours at half load. It is fairly quiet at 72dB, and its electric starter makes it easy to start. It also has a pull cord. Its fuel capacity is 5.2 gallons, which will give an operating time of 12 hours at 50% load. It has wheels and drop-down handles to move it around. However, it weighs about 140 pounds, which might fall outside of your remit for an emergency portable generator. 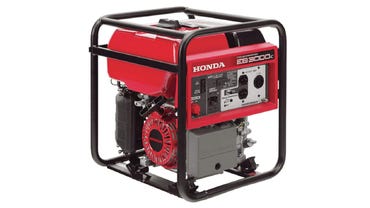 This Honda 3,000W generator has wheels and a handle for portability. It weighs 71 pounds so can easily be lifted. The backup power generator will deliver up to 3,000W in use. Its GFCI (Ground Fault Circuit Protection) will protect all appliances and tools that are plugged into the generator. It has a 2.6-gallon gasoline tank capacity that will run for over 9 hours at 50% load. 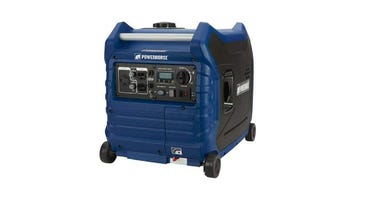 The Powerhorse portable inverter generator will deliver 3,500W start-up and 3,000W running. It will work to power a small home TV, fridge, laptop lights, and fire for under 12 hours per day. The Powerhorse has an electric start motor and is quiet in running. The generator running time is up to 11 hours at 25% load -- and, usefully, you can connect two of these backup generators together in parallel to give you up to twice the power. 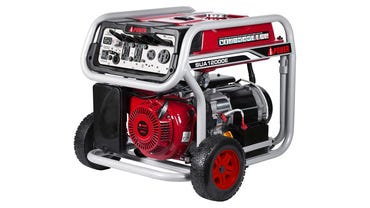 The A-iPower portable generator will deliver 12,000W starting with 9,000W running to power a medium-sized home. You need those starting watts to power up a surge in demand over and above your normal average running wattage for your whole house.

The startup draw is generally more than the running wattage. The A-iPower uses gasoline to run and will happily run for 9 hours at 50% load. It is C.A.R.B. compliant so it can be used in California.