Security and surveillance are one of the biggest growth areas in the ever-expanding UAV sector. While it's a relatively recent addition to enterprise toolkits in many industries, the use of drones to provide aerial assessments of activities on the ground is actually a return to form for the technology, which has seen some of its most ambitious development in defense applications.

This lineup of aerial hardware fits a variety of enterprise photography and video use cases.

The reasons are clear. Aerial vehicles can cover vastly more terrain than slower, clumsier ground-based surveillance systems -- which is why they've been a key component of military and law enforcement applications for decades. But drones, which are smaller, cheaper, and more efficient than manned-aircraft like helicopters, have very quickly democratized access to aerial security and surveillance and opened up the skies to companies of all sizes across sectors.

The current lineup of security drones reflects the variety of use cases out there, from fixed-wing models that can cover large areas quickly to nimble quadcopters that scan confined perimeters and elaborate structures with a variety of sensing and monitoring equipment. They were selected to provide a practical, best-in-class list based on feedback from users in relevant industries as well as a representative cross-section of specializations in a fast-growing sector.

Here are our picks for the best security and surveillance drone systems available. 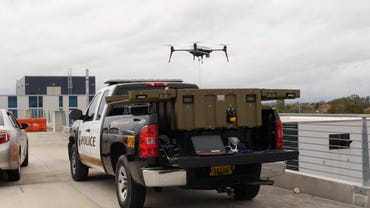 Want a surveillance and security drone that was used at the Super Bowl to monitor crowds and has been selected and deployed by the Miami PD? Easy Aerial's Smart Aerial Monitoring Systems (SAMS & SAMS-T) are mobile, durable, and fully autonomous drone-in-a-box solutions. The system can be operated completely remotely, helping the tech stand out in a crowded field.

Designed specifically for perimeter security, the system consists of a lightweight falcon quadcopter with a fly time of about 50 minutes, a durable self-sustaining ground station that charges the Falcon while keeping it safe from the elements, and a proprietary fleet manager and communication system. Systems have been successfully sold in the US, Europe, Israel, Thailand, Japan, and Central Africa. 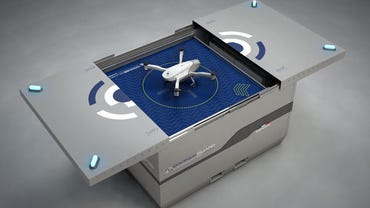 Skeyetech by Azur Drones makes an alluring promise: It requires no pilot training for security guards and no preexisting flying skills. The drone is deployable in less than 30 seconds and everything from takeoff and landing to path-planning is handled automatically. Security teams follow automatic missions or order live missions via Azur's integrated Video Management System, which provides real-time HD video to security HQ.

One advantage of completely autonomous operation? It can be utilized for 24/7 deployments. Like many enterprise security drones, a base recharges and protects the drone between missions. The drone is also equipped with a pyrotechnic recovery system and an ultra-performing geo-caging system for aerial safety. 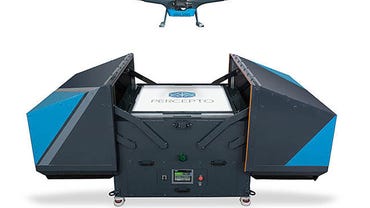 Percepto is at the forefront of redefining how industrial sites and critical infrastructure are holistically inspected and monitored, harnessing remote robotics to autonomously collect, aggregate and analyze visual data.

Leveraging its experience with Percepto Sparrow, the most deployed drone-in-a-box solution on the market, the company introduced Percepto AIM (Autonomous Inspection and Monitoring), the first end-to-end autonomous inspection and monitoring platform. Percepto AIM empowers the remote operation center of the future to assess risk, minimize downtime, drive efficiency, increase safety and reduce operational costs.
Percepto's solutions are the most widely deployed drone in a box on the market, trusted by Fortune 500 customers in more than 10 countries including ENEL, Florida Power and Light and Verizon.

Their reliable technology has enabled BVLOS approvals in a number of leading countries, including the US to allow for truly remote ops 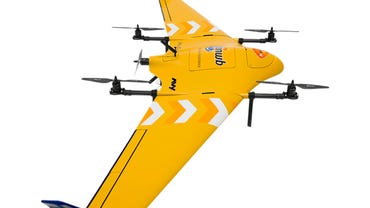 A winged drone that can take off and land vertically? Inspired by sci-fi Thunderbird aircraft, the Avy Aera VTOL Drone isn't explicitly a surveillance tool, but situational awareness certainly falls into its brief. The Drone has been used for everything from wildlife protection to medical deliveries. Unlike quadcopters, winged drones have a substantially longer range and are more energy-efficient. But quadcopters are much more nimble than winged drones. Avi combines the best of both worlds.

The Aera VTOL is self-flying and designed to hold a payload. That could mean deliveries of medical supplies, but it could also mean a sensor suite, making it useful for a number of security and recon applications. Powered by Auterion, a drone management infrastructure, it's capable of third-party integrations, making it a fantastic base to build on. 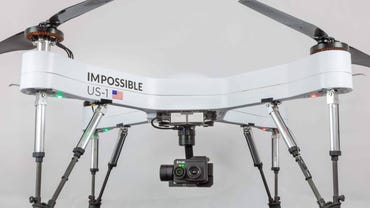 Have a job of a more delicate nature? Intelligence or law enforcement work, perhaps? Impossible Aerospace is a good place to start. The company makes the US-1, a drone engineered with features explicitly designed for law enforcement as well as operations such as firefighting, disaster response, and critical infrastructure.

Not surprisingly given that mission brief, the drone is capable of heavy-lift applications, with a payload capacity exceeding six pounds. It has an impressive 75-minute flight time to boot, longer than most security quadcopters. The US-1 is currently certified with FLIR and Workswell camera systems but can be configured for customized payloads as well. It's also powered by Auterion, a state-of-the-art drone management infrastructure 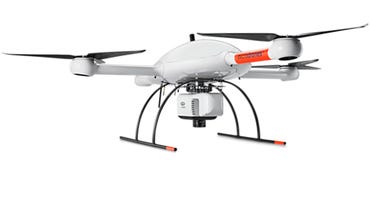 Microdrones has a unique payload proposition: Lidar. Three years in the making, the company has integrated its heavy lifting MD4-3000 drone with a Riegl miniVUX-1DL and a SONY RX1R II camera for rapidly producing colorized pointclouds. Surveying, land development, infrastructure inspection, environmental monitoring, precision agriculture, and public safety are done more efficiently and effectively with the help of Microdrones solutions. If your aim is to inspect large infrastructure projects, Microdrones offers one of the most powerful toolkits on the market. 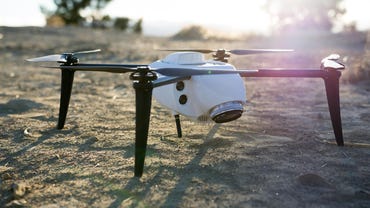 Kespry's value proposition is a drop-dead simple drone technology stack that makes inspection and inventory management a snap. The S2's rated 30 minute flight time makes security applications limited, but the technology stack incorporates complete site modeling via lidar and thermal sensors and offers powerful analytics for industries like insurance. Add to that tablet-based path planning and features like automatic takeoff and landing and this is truly a push-button solution for a variety of aerial inspection applications. 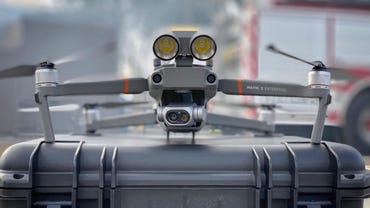 DJI is the world's leader in civilian drones and aerial imaging, so it makes sense that they've extended their dominance into the security and surveillance arena. The DJI M2E Dual is a new comprehensive drone solution created specifically for use in security and monitoring situations. There are a number of mission-specific modular tools and sensors available that fit seamlessly onto DJI's popular Mavic 2 platform. DJI offers a customized flight control app and restricted zone management. Use cases include wildlife management, wildfire mitigation, and security applications.

Drones are being used in a wide variety of security applications, from surveilling perimeters and conducting 24/7 surveillance of huge sectors to responding to alarms and conducting initial assessments. But there are a few things prospective enterprise drone customers need to know.

First among these is that commercial drones, including both piloted and autonomous drones and those used in security capacities, are subject to strict FAA regulations. In the US, drone services companies and enterprise customers have been frustrated by a stringent regulatory environment that restricts many kinds of non-recreational drone use. The FAA has made overtures toward loosening drone use in enterprise settings with its Unmanned Aircraft System (UAS) Integration Pilot Program, but it could be years before there's a practical framework for commercial drone activity over populated areas.

The deployment of small unmanned aircraft is restricted under the FAA's Rule 107. Currently, small drones must stay within line of sight of an operator and can only fly over people without their express consent, factors that make it all but impossible to scale delivery anywhere other than niche environments like golf courses. Waivers are available in some cases, but the regulatory environment has severely restricted commercial drone use in the US, including insecurity.

"The FAA is under a lot of pressure to solve these problems and get ahead of the curve with drones," Tyler Collins, VP of Airspace Services for PrecisionHawk Unmanned Systems Innovation, a commercial UAV company, told ZDNet. "There's a need to expand the current regulatory environment of what's allowed with UAVs, and the question the FAA is working to answer now is how we ensure that we're going to do that safely as hundreds of thousands of these things start to take flight."

Nevertheless, there are many environments and use cases where security drones can safely and legally be deployed. These include infrastructure and pipeline projects in access-controlled sites, mining operations, golf courses, and other venues where consent forms can be collected, and a variety of other industries like insurance, disaster response, wildlife management, and fire mitigation, for which the FAA has been inclined to grant waivers or the current regulation leaves enough room for pilots to operate.

What to look for when evaluating drones

In making the drone selections above, we considered a number of these use cases, as well as several factors related to who will be deploying the drones and how they will be used. One of the most popular developments in security drones is the so-called drone-in-a-box concept, in which a portable, weather-resistant base and recharging station also operates as a drone garage, of sorts. Systems like this tend to be rapidly deployable and offer automated takeoff and landing functionality, making them particularly suitable to sites where on-call 24/7 security is required.

On the other end of the spectrum, fixed-wing drones are capable of covering vast distances and typically have significantly longer flying times per charge than multi-rotor vertical takeoff and landing (VTOL) drones. The drones sacrifice the agility necessary for many inspections and close-quarters applications, but for wildlife management and fire mitigation, a fixed-wing drone can come in handy. We included the Avy Aera, which adds VTOL capabilities to a fixed-wing drone because it does a great job of offering the best of both worlds.

Perhaps the most important consideration for prospective enterprise drone customers is sensor package. Will the UAV operate during daylight hours and cover relatively open terrain? If so, a simple visual spectrum camera may be sufficient for surveillance needs, and something as simple as DJI Mavic 2 is recommended. But specialized use cases required more sophisticated equipment.

Thermal sensing helps identify body heat from humans and animals even when there's dense ground cover or vegetation, making it essential in wilderness applications or if drones fly after dark. Lidar, with its high-fidelity point clouds, is great for monitoring infrastructure for project progress or structural integrity. Ultrasonic sensors have also been deployed successfully on UAV.

Another consideration is whether your company plans to consider an investment in security drones a capital expense or whether a drone-as-a-service model offers more flexibility. In a bid to spur market interest and penetration, most enterprise drone companies have some DaaS options.

A final consideration is the level of autonomy desired. Many drones come with some form of obstacle avoidance and automated features such as pilot-free takeoff and landing. Some drone systems, such as Kespry's, do away with joysticks altogether and allow pilots to manage flight plans and choose routes entirely via tablet-based interfaces, which extends the reach of drones beyond highly skilled pilots.

One word of warning related to data security: Because unmanned aircraft often conduct video surveillance of sensitive locations, it's important to protect data via encryption and to ensure that valuable company assets aren't unwittingly being shared with suppliers or left vulnerable. Any reputable company offering enterprise drones will take security seriously, and the drones on our list are no exception.