Don’t want your drone fleet to be grounded? Read this article to learn how to register your drones. Yes, it’s the law. Again.
Written by David Gewirtz, Senior Contributing Editor on Jan. 19, 2018 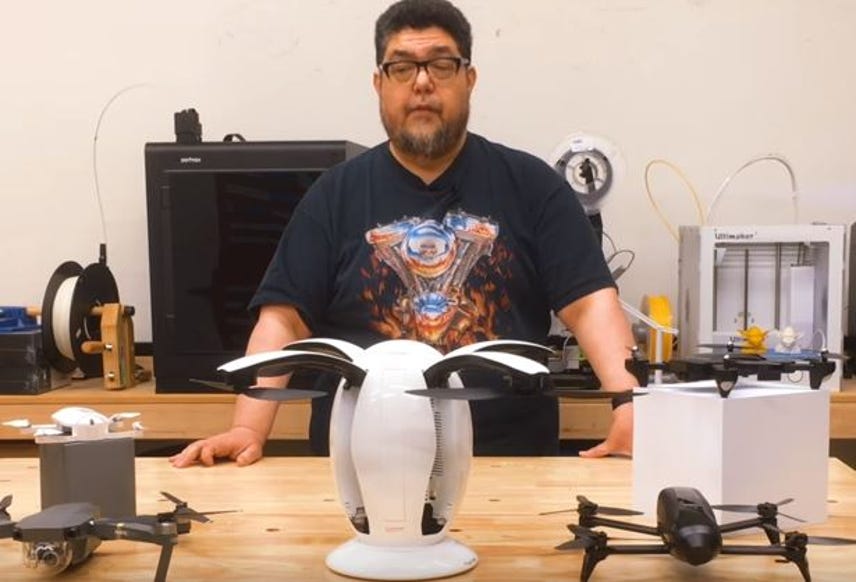 It was the law. Then it wasn't the law. Now, it's the law again. Welcome to very important installment of ZDNet's DIY-IT Drone and Robotics Discovery Series. This article could save you thousands, even hundreds of thousands of dollars, not to mention prison time.

This is how Google drones will deliver your packages, and keep your pets safe

Drones could be a threat to pets and powerlines, so Google has come up with a new robot to help.

Responding to the growth in drone use throughout the United States, in late 2015, the FAA began to require anyone flying a drone that weighed between 0.55 pounds and 55 pounds to register with the agency.

This was in addition to the requirements for commercial drone pilots, who were (and still are) subject to what's called Part 107 licensing. If you want to fly a drone for money, the FAA requires you to pass a licensing test to demonstrate your knowledge of both legal requirements and aircraft handling.

Even though the recreational registration only required providing some basic personal information and paying a five dollar fee, recreational drone operators considered the registration rule restrictive and anti-freedom. Hobbyists were not amused. They fought the law.

The FAA's registration requirement was in conflict with Section 336 of the FAA Modernization and Reform Act of 2012. This was the rule preventing the FAA from creating rules or regulations regarding model aircraft. The Court explicitly determined that "small unmanned aircraft" are "sometimes known as drones," and that these "Unmanned aircraft operated for recreational purposes are known as 'model aircraft,' and we will use that term throughout this opinion."

Ipso facto, drones are (or, as we'll see in a minute, were) model aircraft. Model aircraft, according to the Court, could not be required to register with the FAA. So as of the date of the ruling, the FAA could no longer require hobbyists to register their drones, and, in fact, was required to return the five dollar fees charged back to flyers since 2015.

Everyone was happy. Drones danced in the skies. A great five-dollar weight was lifted from the shoulders of recreational drone flyers everywhere.

It all came crashing back down to Earth on December 12. On that day, President Trump signed the National Defense Authorization of 2017 into law. It became Public Law 114-328 on December 23, 2017.

While NDAAs contain a whole lot of national security authorizations, recommendations, and requirements, the one facet of concern to recreational drone flyers is this: you're now once again required to register your drones.

To be honest, registration is basically painless for recreational flyers. In the attached video, I take you through the whole process, step-by-step. You create an account on the incredibly silly-named faadronezone.faa.gov site. To do this, you enter an email address and a password, confirm the email address from an email mailed to you, fill in your billing and personal address, and pay five bucks.

That's it. My entire tutorial video is less than five minutes long. It's just not that hard to do. You'll get an FAA registration number, which you must attach to all your drones. I stuck mine inside the battery compartment.

What happens if you don't register?

Seriously, what could possibly happen? It's just a quadcopter, right? Uh. No. I'll let the FAA explain to you the penalties for not registering your drones.

Failure to register an unmanned aircraft that is required to be registered may result in regulatory and criminal penalties. The FAA may assess civil penalties up to $27,500. Criminal penalties include fines of up to $250,000 and/or imprisonment for up to three years.

So, registering is five bucks and five minutes. Not registering can be thousands of dollars and/or prison.

Space
How to resize your images quickly and easily

How to resize your images quickly and easily