Meat analogues or "plant-based" meats, such as the Impossible Burger and the Beyond Burger, have received wide media coverage over the past several years. As fast food chains have begun offering meat-free versions of their popular sandwiches, much of this content has been positive, such as my write-up about the Burger King Impossible Whopper for my local newspaper.

When compared to their meat counterparts, however, the nutritional "healthiness" of these analogues has not been fully researched. It will require long-term study to determine if they can replace animal meat in a well-rounded diet due to their lack of overall amino acid "completeness," concerns regarding additives and processing, and questions about their sustainability in terms of overall manufacturer impact on the environment.

Despite these unknowns, there is still significant interest in creating these foods for several reasons.

The first reason is the amount of energy and land required to produce animal protein versus plant protein. The energy inputs in an agricultural system are direct inputs of labor (human and animal), fuel (oil, gas, coal), electricity (which is grid-supplied), solar energy (to drive photosynthesis in the plants, and to potentially supply electricity), and indirect inputs of seeds, fertilizer, herbicides, pesticides, machines, and water.

The energy, other resource inputs, and total cost of production of plant-based proteins versus animal-based proteins will become a significant factor in the future, as our planet's climate continues to change and specific resources become scarcer with our growing population.

Additionally, as we consider the possibility of human colonization on the Moon and Mars, we need to factor in how those resources would need to be conserved to sustain populations. It's likely, save for the use of other experimental technologies like cellular printing, that plant-based protein would need to be a significant part of a human diet in those environments.

But as with any new food technology, there's the issue of user acceptance. And yes, some people already don't eat animals or want them to be raised for food. But others are slower to give up animal meat.

That hasn't stopped Impossible Meat. Building on their success with the Impossible Burger and their partnership with Burger King, the company has now launched Impossible Chicken Nuggets, a meat analogue that is supposed to be a dead-ringer for the fast food equivalent.

For parents with hungry, picky kids of all ages -- and for the future of human colonization on other planets -- my wife and I decided to "take one for the team" to see how the new Impossible Chicken Nuggets hold up against rival products on the market.

In no way should this be viewed as an exhaustive comparison of everything that exists in this space; we bought the brands we could easily find at Walmart and Trader Joe's.

All the nuggets were heated up in an Instant Vortex air fryer and consumed with various condiments, including honey mustard, Asian sweet chili sauce, and a commercially-available BBQ sauce. Although deep frying might have improved the overall taste (and is more likely to be how a restaurant would serve them), we chose not to deep fry because this is not a typical home cooking method, and these products were bought in retail.

The heavyweight and front-runner 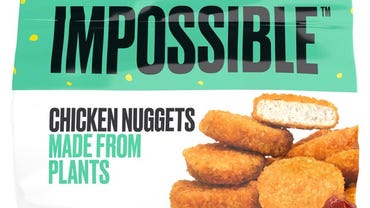 The Impossible Chicken Nuggets were purchased at Walmart, one of the few retailers that are currently carrying them. However, the product is expected to be sold at 10,000 locations by the end of the year, including Gelson's, Kroger, Albertsons, Giant Stores, ShopRite, and Safeway.

From a macronutrient perspective, these are very close to a leading brand of real chicken nuggets, Tyson, which are 270 calories per serving, 14g protein, 17g fat, 4g of saturated fat, 0g fiber, 15g of carbs, 40mg of cholesterol, and 470mg of sodium. So they are better on a saturated fat and cholesterol perspective, but they are both very high in the sodium department. Tyson's air fried nuggets are a bit better in terms of the fat and cholesterol content, but the sodium is a whopping 520mg.

Let's not kid ourselves, though. None of this stuff is health food.

Nevertheless, we were actually quite impressed with how these tasted, their overall texture (which closely mimicked a processed chicken nugget) and their "juiciness." The umami "chickeny-ness" was there along with the saltiness, instead of it being a pure salt bomb. The coating was more of a breading than the batter you might see in McDonald's products.

They paired well with the condiments, and I suspect if you fed these to a young child or even your average adult without disclosing their origin, they probably would not know the difference. From a user acceptance perspective, I think they hit the mark. Restaurants could definitely sell these successfully in large volumes, and I suspect that a larger-sized version for use on sandwiches would go over well.

As an adult, I am unlikely to be a regular consumer of this product, as it has limited culinary applications beyond snack food. But did I like the nuggets? Yeah.

The one with culinary chops 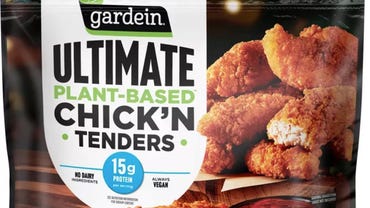 Gardein, which is now part of ConAgra, has been in the meat analogue business since 2003 and was founded by a classically-trained French chef, Yves Potvin. Gardein's products are more commonly used in culinary applications, such as vegan and vegetarian restaurants. They've been marketing different product versions to the foodservice industry in unprepared (plain) forms and to retail as consumer products with seasonings and sauces.

This particular product is breaded, frozen, pre-cooked, and formed into a natural-style chicken tender shape -- with no sauce, although they sell it in different sauced versions. Its ingredients include soy protein isolate, pea protein concentrate, wheat flour, canola oil, and sunflower oil.

Overall, we thought these had a similar texture to the Impossible with less aggressive seasoning, likely due to their lower sodium content. They didn't particularly have that chickeny umami flavor the Impossible ones have, but they have a more natural "meat" texture. So while I liked them less for their junk/fast food appeal, they have more flexible culinary applications.

To test this, we made a "chicken" parmigiana using some of the Impossible and the Gardein chicken, and we tasted it with a tomato sauce, mozzarella cheese, and pasta. As someone who generally dislikes white meat chicken, I preferred this more, and I wouldn't mind eating it like this occasionally. Generally speaking, I felt it fared better with the sauce treatment than the Impossible Chicken did. 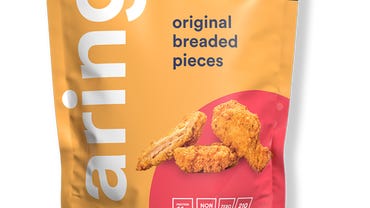 On paper, the Daring product looked better nutritionally than some of the others on this list -- except for the huge amounts of sodium. If I liked them, I might forgive them for this, but I absolutely hated these things. Over-the-top salty with a terrible plastic texture, they tasted like aliens saw a picture of cooked chicken meat from a TV broadcast and used this to feed their human abductees in their hybrid breeding program. Major ingredients included soy protein concentrate, sunflower oil, potato starch, and rice flour. I would pass on these. 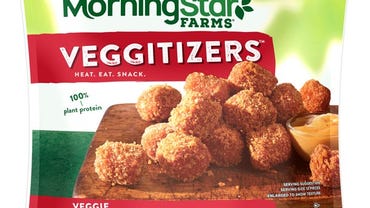 These also looked good on paper from a protein and general macronutriant standpoint. Eating them, however, is another matter entirely. These things are tiny, like the size of small marbles or fried okra nuggets (which I would vastly prefer to eat than these). They are supposed to resemble "popcorn" chicken rather than nuggets -- the company sells other products in their Veggetizers line that are more nugget-like, but they are pre-seasoned with Buffalo Wing, Garlic Parmesan, etc. flavors.

Did I hate them less than the Daring product? Yes. Did I like them? No. They tasted like all breading, with no meaty moisture in them at all. Maybe I might be inclined to try one of the other products at a party if they were put out with a couple of beers, but I don't see myself as a future Veggetizer customer. Major ingredients include soy protein concentrate, soy protein isolate, wheat flour, and yellow corn flour. 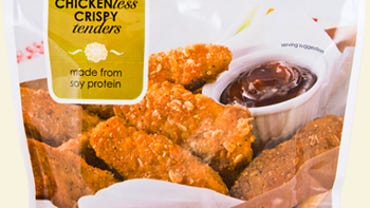 My wife thought these tasted very similar to the Gardein tenders, and I'm afraid I have to disagree. I felt these were not as bad as the Daring, which were horrible, but definitely not as flavorful or as pleasant a texture as Gardein's product; these were saltier. Primary ingredients include soy flour, textured wheat protein, wheat gluten, and a whole grain flour blend of amaranth, quinoa, millet, sorghum, and teff for the breading. Probably the healthiest of all the offerings here, but they were literally tasteless except for the salting.

From a macronutriant standpoint, meat analogues such as Impossible Chicken Nuggets resemble their meat counterparts in equivalent calories, protein, carbohydrates, and fat composition. They are typically very low in cholesterol compared to their meat versions, but they often contain significantly higher amounts of sodium. As with their meat counterparts, they are also heavily processed, which has put them under heavy scrutiny from those that feel processed foods are unhealthy.

What are fake chicken nuggets made of?

Meat analogues are made out of vegetable proteins, such as soybean concentrate, soybean isolate, soybean flour, pea protein isolate, textured wheat protein, and wheat gluten. They also use various flours and starches, such as wheat flour, potato flour, rice flour, and cornstarch, in addition to vegetable oils, spices, salt, and various chemicals and preservatives used in processed food products.

Why do people want to eat fake chicken nuggets?

Some people don't want to eat animals -- or want them to be raised for food -- for ethical and moral concerns regarding their treatment. They may also have religious or other dietary requirements that may bar the consumption of animals.